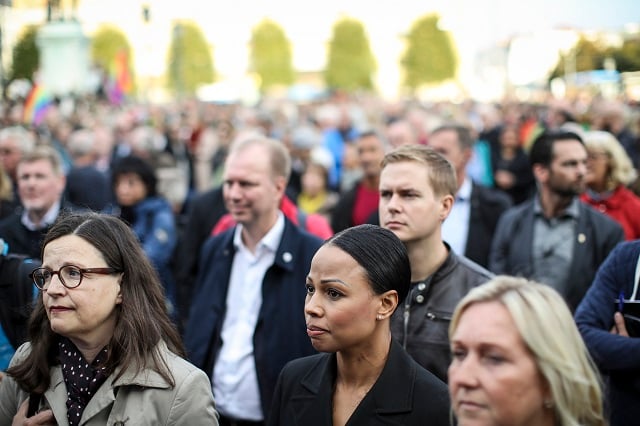 We sometimes hear the claim that Swedish democracy is in crisis, and that trust in the democratic system is under threat. These claims are heavily exaggerated. In the SOM-Institute’s systematic surveys of the Swedish population’s opinions, no crisis of democracy is visible.

On the contrary, the proportion who are satisfied with how Swedish democracy works is already high — and it's increasing.

It’s easy to get the impression that Swedish democracy and public dialogue is in crisis. Anyone can see more or less daily news about online hate and threats against those who express views that are unwelcome in one way or another. Fake news and misinformation are portrayed as big problems and threats to the public. Alternative media and a lack of trust among the general public for journalists and traditional media are also often discussed as a problem for Swedish democracy.

In the SOM-surveys last autumn, when we asked Swedish people how satisfied they were with how Swedish democracy works, 76 percent of them said they were “very” or “quite” satisfied. The highest level of dissatisfaction was found when the SOM-institute started its surveys in the mid-90s, when the proportion of those who were satisfied was around 50 percent. Today, three out of four Swedes are satisfied with how the democracy works, and what’s more, over the last year that proportion has grown.

Trust in the central societal institutions is also high and in several cases demonstrates an increasing trend over the past year. A majority of those who participated in the 2017 SOM-survey said that they had “very” or “quite” high trust in important institutions such as the police, courts, universities and healthcare as well as radio and TV.

When it comes to trust in the police, courts and schools, that’s a significant increase compared to one year earlier.

When it comes to trust in the media, Ulrika Andersson and Lennart Weibull, with help from the SOM-surveys, have shown that the trust in both daily press and radio and TV has been stable over recent years, and in both cases trust is higher today than it was ten years ago.

One novelty in relation to trust in the media is that polarization is increasing, and political polarization in particular. This is most clearly seen when it comes to trust in radio and TV. There, the differences between groups with different political party sympathies have clearly grown during the last two years compared to earlier. Put simply, this means that trust in radio and TV has risen among people who are on the political left, while it has fallen among those on the right.

In a report for the Institute for Media Studies, Ulrika Andersson has also shown that 68 percent of people say that they either completely or partially agree that journalists often choose a news angle based on their own views. The fact that so many people believe journalists are influenced by preconceptions or political leanings in their reporting could have serious consequences and should provoke soul-searching among the media.

Ahead of the 2018 general election, the citizens’ agenda looks different than it usually does. To begin with, traditional key issues like labour market and economy are missing from voters’ priorities. Secondly, traditional welfare issues such as healthcare and schools have now been joined at the top by immigration and integration as well as questions on law and order; in other words criminality, police, and the judicial system.

2018 will therefore likely be dominated by questions which neither politicians, journalists or voters are used to discussing in Swedish election campaigns and where the tone is often hard.

Sweden is now heading towards what is probably the first election campaign where immigration and integration are the most important question for voters, and according to the SOM-surveys, beyond immigration, law and order is the issue which has grown most in importance to voters since the 2014 election. And it’s these two questions with which the media has the biggest problem, with a growing polarization of trust among Swedes.

Even though Swedish democracy is strong and characterized by high trust and satisfaction, there are warning signs in the form of increasing polarization and a higher level of conflict. There’s now an important challenge for all participants — journalists, politicians, and voters — to discuss these newer political issues of immigration and criminality in a knowledge-based and common sense-led manner, instead of further contributing to more polarization of the debate.

Article written by the SOM-Institute's Johan Martinsson, originally published in Swedish in Sydsvenskan and translated into English for The Local by Catherine Edwards. Read the original version here.

In the spring of 1999, Russia’s prime minister, Yevgeny Primakov, was on a plane to Washington for talks, just as Nato announced airstrikes on Serbia. The bombing campaign, aimed at halting Serb attacks on Kosovo Albanians, targeted Russia’s Slav and Orthodox ally. On receiving the news, Primakov turned his plane around in mid-air and flew back to Moscow.

This was the first major confrontation between East and West since the end of the Cold War. Russian public opinion swung overwhelmingly behind the Serbs. Moscow liberals warned the conflict would lead swiftly to “a strongly anti-Western, Cold War-oriented regime”. Vladimir Putin became prime minister that summer. And the rest is history.

This was “blowback” for Nato – the unintended adverse consequences of a foreign policy intervention. This week, Putin is experiencing blowback himself following his invasion of Ukraine, with Sweden rushing headlong to join Nato, whose actions helped unite Russia so suddenly against the West a quarter of a century ago.

Joining Nato brings down the curtain on a remarkable period in Swedish and European history. The last time the country declared war was in 1810 against the British. Not a single shot was fired, and peace was declared again two years later. Since then, Sweden has pursued a policy of neutrality in all armed conflicts.

That era ended on Monday. The government confirmed what everyone knew already – that it would apply to join Nato.

During the Cold War, neutrality gave Sweden the freedom to manoeuvre between the two blocs led by Moscow and Washington. Sweden joined widespread condemnation of the Soviet suppression of Czechoslovakia’s democratic uprising in 1968.

But its emblematic leader Olof Palme also backed the global movement against the Vietnam war, hosting a tribunal in Stockholm that symbolically put the USA on trial for war crimes in Indo-China. Here was a nation that had found a middle way between capitalism and communism, it seemed, with a diplomatic as well as an economic dimension.

Sweden became a leading voice against nuclear weapons. Successive leaders pushed for a nuclear-free zone in the Nordic and Baltic regions. Sweden’s self-image was of a “humanitarian superpower”, its independence on the world stage spilling over into anti-colonialism and feminism.

Following the collapse of the USSR in 1991, Sweden sought to make the most of the “peace dividend” offered by the end of the Cold War, closing military bases, ending conscription and slashing defence spending. By 2012 the head of the armed forces admitted Sweden could withstand a limited attack for only about a week.

All this is now behind us. The middle way is to become the Nato way. Sweden may continue to object to nuclear weapons, but it has opted for the US nuclear umbrella to ensure its security. It may continue to champion liberal causes, but it will have to bite its tongue as its allies with conservative Nato states such as Hungary and Turkey, not to mention the possibility of a second Trump presidency in the US.

Beyond the immediate concerns about Russian intentions in Ukraine, Sweden is contributing to the return of a polarised world. The optimism and hope heralded by the collapse of communism 30 years ago have turned out to be a chimera. New generations will grow up in fear of the enemy and in the shadow of nuclear annihilation. In these bleak circumstances, we should mourn the passing of Sweden’s neutrality in global affairs.

It is unfortunate that Sweden’s historic pivot is taking place with unseemly haste. While public opinion has clearly shifted in favour of Nato since the invasion of Ukraine, the majority in favour is still relatively slim and is based on fear rather than thoughtful and thorough debate. In a poll at the end of April, 55 percent of Swedish men but only 41 percent of women said yes to Nato. There are signs that opposition to Nato among the young may actually be growing.

But the decision to join Nato is a minor tremor rather than an earthquake. While Sweden may have been non-aligned, it has not been neutral for a long time.

Sweden’s pro-Western orientation during the Cold War was an open secret on both sides. As early as 1954, Sweden signed a top secret agreement with the US regarding collaboration and intelligence sharing, including spying on Russia, whistleblower Edward Snowden revealed. Sweden already makes “particularly significant contributions” to the alliance, Nato says. Accession to the European Union in 1995 came at the cost of the abolition of neutrality as a principle.

In this sense, joining Nato means Sweden is now shedding its mask of neutrality, rather than adopting a radically new stance.

The point of any nation’s defence policy should be to provide its population with a secure space for peace, love and Kumbaya. There is an almost giddy excitement in much of the Swedish media about Nato membership. As we progress towards our armour-plated future, let’s not forget what we have lost.