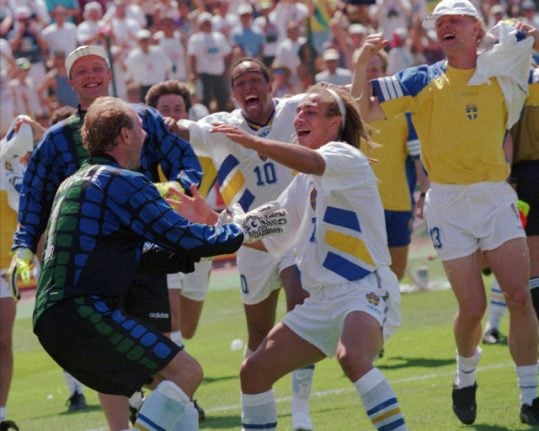 With their dogged defending, tactical discipline, and reliance on penalties, own-goals or any other way possible to get the ball in the back of the net, Sweden haven't been the prettiest team to watch at the World Cup. Perhaps that creates a false sense of security for opponents – or at least for some opposing pundits.

The truth is though that caution would be best advised for England, whose competitive record against Sweden doesn't make for inspiring reading if you're an English fan (one win in the last eight non-friendly encounters).

Nor does their World Cup record against the Nordic nation look particularly pretty. The most recent World Cup encounter between the two was a 2006 2-2 draw in Cologne where England were ahead twice and thought they were celebrating a late Steven Gerrard winner, only for concentration to slip and Henrik Larsson to pop up with a 90th minute equalizer.

The only other meeting between the two nations at the World Cup proper was in 2002 in Saitama, where Sol Campbell put his team ahead only for – stop us if you've heard this before – England to let Sweden back into the game with a moment of madness at the back that allowed Niclas Alexandersson to equalize. To state the obvious, neither result would in itself be good enough for England to progress on Saturday, and would force a penalty shootout.

And about those penalties: England may just have exorcised their demons in that regard with a first ever shootout triumph at the World Cup, but Sweden have very good memories to look back on when it comes to spot-kicks. In 1994, the year of the finest Swedish run at a World Cup since making the final in 1958, the Swedes squared up with Romania in the quarter-finals having already well exceeded expectations. Behind in extra time and seemingly heading home, Kennet Andersson scored a dramatic 115th minute equalizer, taking the game to penalties.

In the subsequent shootout, Andersson, Tomas Brolin, Klabbe Ingesson, Roland Nilsson and a then fresh-faced Larsson all scored their spot-kicks before Thomas Ravelli sealed his place in Swedish football history by saving from Miodrag Belodedici to send the Swedes into the semis.

Parallels are being drawn in Sweden between the current crop and the 1994 team, who few at the time would have backed to finish third in the tournament as was the ultimate outcome.

VIDEO: Swedes predict they'll get to the semi-finals of the 2018 World Cup

The continued importance of that 1994 triumph in the Swedish football psyche should not be overlooked – if Saturday's quarter-final with England goes to penalties, you can guarantee that Sweden's players will have the success of their predecessors in the back of their minds, and be able to take some confidence from it. Don't write the Swedes off just yet, England.

Who do you think will win? Let us know in the comments below…