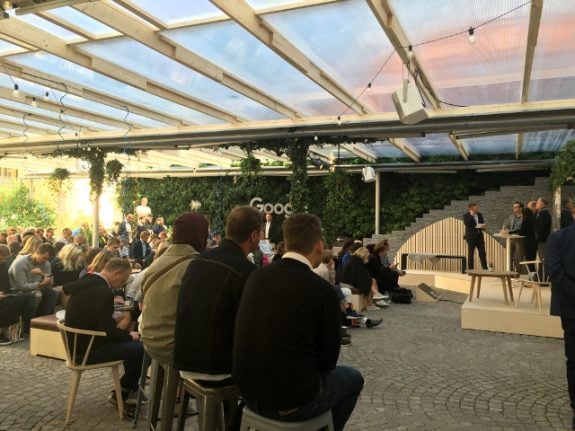 One of the many seminars at Almedalen. Photo: Rupali Mehra

Over the weekend I find myself in the company of senior journalists at a restaurant that has a ring side view of Visby's most happening spot. Apart from the World Cup – major upsets and Sweden's chances – the conversation naturally turns to politics. That's not surprising given that it is the countdown to elections and we are just hours away from the most sought after week of the year – the Almedalen Week.

A table away are members of a political party, one of whom I am told could well be the next prime minister. It is not often that one rubs shoulders with prime ministerial candidates at an eating joint. But during Almedalen Week anything can happen. And it does.

Since it began with Olof Palme's speech on the back of a truck 50 years ago, Almedalen Week has been about people, politicians, problems, policies and perhaps solutions. Engaging with the public, putting across your views and listening to theirs has been its hallmark.

But with democracy transcending space and time in a digital landscape, is a physical forum like Almedalan Week still relevant?

“Every now and then some people keep saying it is going to die out, and it won't last, but I don't think so. For the politicians, meeting people in real (life) and not only on social media is important. So you can combine the two,” says senior journalist Inger Arenander as we sit down for a cup of coffee on the fringes of the numerous stalls lining Cramérgatan. Arenander who first reported on the Almedalen Week way back in 1981 has been observing the changes over the years. Despite the omnipresent social media, she believes in-person interactions are “back in fashion”.

“I think every human meeting adds more than the statements you can put out via twitter. While social media is convenient, it can sometimes leading to misunderstandings. You cannot read a person's face on social media. Face-to-face interactions, like the ones you can have with politicians at Almedalen Week, adds a real dimension to the context. In the US for example, you never meet your political opponents personally but here at Almedalen you can,” she explains.

Accessibility is the key to the week-long forum for democracy. While security has increased in recent years, it is possible to walk up to political and business leaders and have a conversation. Seminars are open to the public and most have a Q&A session towards the end. Exchanging ideas and engaging in a civil debate on local, regional and global issues is what makes Almedalen week unique.

“In the beginning there were just some speeches and some seminars, and not all parties participated. When the lobby organizations discovered that there were a lot of journalists that had not that much to do in middle of the summer they started to take part. After them came the big companies, regional and local governments and state organizations,” says Anders Jonsson, a political analyst and journalist who has observed the Almedalen Week for close to 40 years. “You can meet everyone, including ministers and company leaders who are hard to meet otherwise. It is like a fair for the politicians and business interests. That's why they still go there,” he adds.

The absence of Prime Minister Stefan Löfven last year raised murmurs in the media on whether political parties are losing interest. This year, with elections less than three months away, nobody is taking a chance.

Politicians, lobbyists, activists, corporates, citizens and even musicians make their way to the island of Gotland on the 27th week of the year. Visby, a town that is home to 23,000 people, swells and makes room for 40,000 more. Everyone who has skin in the game wants to be there and have a platform to talk, including international leaders and organisations.

On the first day French Minister of Labour Muriel Pénicaud shared the stage with her Swedish counterpart Ylva Johansson, discussing initiatives to meet future challenges in the labour market. The same day Pénicaud was joined by the State Secretary from the German Labour Ministry, Rolf Schmachtenberg, to debate the EU's social agenda.

“I think it is a fantastic laboratory for democracy, to see all the stakeholders of political debate in Sweden and even beyond. It is interesting to see how you can co-build democracy by debating it in a very open manner. I think it is very inspiring,” Pénicaud says, as I reach out to her after the seminar. Outside the seminar rooms, Almedalen Park is chock-a-block with people as the first speech of the week draws to a close. At Donnersgatan there is no space to even place a toe. Giant LED screens project newsroom debates, the speech of the day and then football.

By evening the crowd moves to various socials and get-togethers, and the networking continues. Venues are crowded, and the presence of the youth does not go unnoticed. “Young, elite influencers,” as Arenander calls them are making their presence felt in political discussions, in the media and in social causes. They are networking and expanding their reach in person and on social platforms, almost simultaneously.

“I think the atmosphere is fantastic,” Thor Kodayari, a youngster from Malmö attending his first Almedalen week, says as we get talking at a social. “My organization's aim is to find collaboration between different sectors and make it easier for social entrepreneurs to survive. Today all those people are here,” he adds.

“It is really important for the youth to be here and talk about their situation. However not everyone can, so we represent them. It is important that the politicians don't make decisions about the youth without their opinion,” says Annso Blixt, who works on issues of mental health.

Indeed, the USP of Almedalen week is civil debate and engagement. Far from losing its relevance, the Almedalan model has the potential to be replicated in democracies across the world. Denmark and Norway have taken a cue in the form of the Folkemødet and Arendalsveckan respectively. Word has it that a similar experiment could make its debut in Austin, Texas, this autumn.

Cynics aside, Almedalen Week is very much on the agenda and is here to stay. And in a day and age where our lives are led on social media, it is the youth who will be the biggest carriers of the messages from this “laboratory of democracy”.

Rupali Mehra moved to Sweden from India in the spring of 2017. She is a former television anchor & editor and now runs a communications consultancy. She can be reached at [email protected]