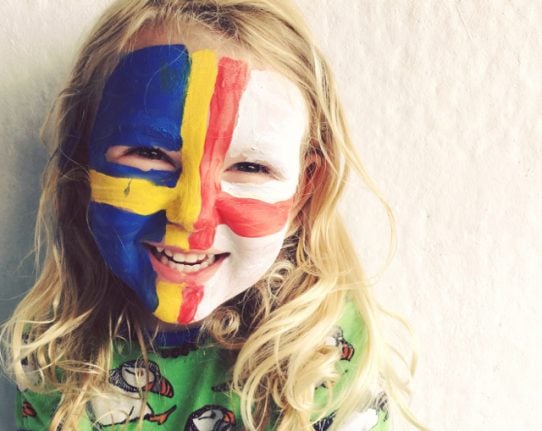 Allegiances are split for many families when Sweden meet England. Photo: Amy Boswood

Swede Lina Yeats and her English husband live in the UK with their two dual-national sons, and while she isn't normally a football die-hard, Russia 2018 and Saturday's match have sparked a heightened interest.

“I think it's great fun that they are playing each other. We aren't the biggest football fans generally but in a World Cup game like this, it gets a little bit competitive although more from my side than my from husband,” she told The Local.

“Our kids are very Swedish in their ways and cheering for Sweden all the way. They are in their Swedish kits as often as possible.”

Things are likely to get competitive in their household come Saturday night, though not as much as a friend's, whose husband “did mention a divorce” she jokes. Yeats is backing Sweden to progress to the semifinals, and thinks there should be something extra on the line at home:

“Maybe we should do some betting: the loser has to cook dinner that night perhaps? I will be bragging if we win, but I suppose in a way it's a win-win… (I don't really think that, I will sulk).” Lina and her kids will be supporting Sweden but her husband is an England fan. Photo: Lina Yeats

English Sabina Ali, whose husband is Swedish and son is a dual national, says the luck of the draw has actually brought their families together:

“I'm quite happy about it. It will be a fun match and it's causing a lot of banter and conversation among my Swedish and English families and friends. It's actually bringing the two sides together in some bizarre way.”

Ali has Swedish citizenship, so intends on celebrating whatever happens – even if she thinks Sweden will edge it.

“I intend to celebrate regardless. Either way my family is supporting a winning team.”

Amy Boswood from England and her Swedish husband Håkan Svanberg live in Sweden with their two dual national kids, and Saturday's match is a thrill for their young ones.

“It's a good opportunity for us to be able to take our kids out to a big screen and knowing that they will be happy with whatever the outcome of the game might be,” Boswood noted.

She thinks the World Cup may be “coming home” for England, starting with a win on Saturday, but her other half doesn't agree:

“I think it will be an even game where England has most of the possession but Sweden wins in the end.” Nicholas Butler is originally from Zimbabwe, but calls Sweden home these days along with his English wife. He is relishing the prospect of the quarterfinal clash.

“I'm buzzing. This is going to be an amazing game and after choosing to live in Sweden for the rest of our lives I feel this is the team I should be following and it's the icing on the cake that it's been done without Zlatan!”

Butler reckons there will be plenty of well-spirited back-and-forth between the two countries, but he's sure English-Swedish relations can survive the fallout.

“I think we have a good banter level and there's gonna be a lot of good-hearted verbal. Over all, it's set to be a cracking day, and let's hope for Sweden v Russia semi-final!” he concluded.