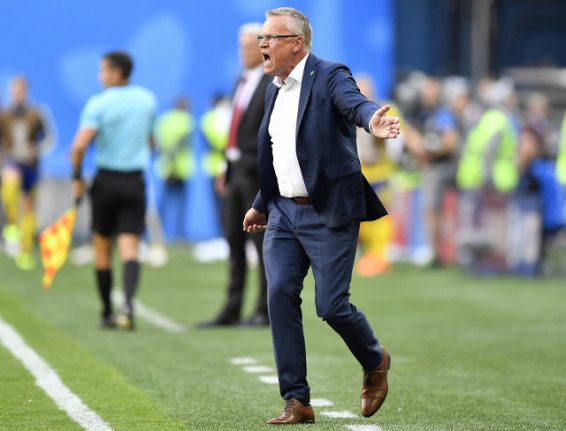 Sweden are attempting to reach a first semi-final since 1994, when they were beaten 1-0 in the last four by eventual champions Brazil.

In the build up to this summer they saw off the Netherlands in qualifying and knocked out Italy in a play-off, before finishing top of a World Cup group featuring defending champions Germany.

Sweden remain one of the least fancied teams left in the competition, with little in the way of star power following the retirement of Zlatan Ibrahimovic after Euro 2016.

“I think there was a coach who once said about their team that they're quite easy to analyse but quite difficult to beat. I think that's a right description for us,” Andersson told reporters on Friday.

“It shouldn't be that difficult to get an idea of what we do.”

“The surprise is probably that we're terribly consistent,” he added. “Whether or not you take us seriously and how they perceive it, that's very difficult for me to say. “

“We're really strong in our beliefs and we really have been from the outset.”

Sweden have lost to England just once in eight competitive meetings — a 3-2 defeat during the group stage at Euro 2012 — but Andersson said past records are meaningless.

“We're a completely different squad and so are they, so anything that went before is not relevant,” he said.

The 3-0 win over Mexico in Sweden's final group match is the only time the Scandinavians have scored more than once in their past 11 official games.

They have kept three clean sheets in four outings in Russia but captain Andreas Granqvist will have his work cut out against Harry Kane, the leading scorer in the competition with six goals.

“He's incredibly skilled, not just at penalties but as a striker. It's going to be a very tough match against him but we will do our best to stop him,” said Granqvist, who will be partnered by Victor Lindelöf in central defence.

“We need to be very strong in the penalty box and try and make sure they don't get the service they need.”

Andersson said it would take a “holistic approach” to beat England, who are looking to reach their first World Cup semi-final in 28 years.

“Football isn't that simple. You can't identify one single factor, you need to look at the overall picture,” the Sweden coach said.

“Many things must be right to beat a team like England.”

“We need to get the defence right, we need to be courageous when we have possession. We have a clear idea of what we want to do in attack and we want to able to implement all of this.”

Seven of England's nine goals in the tournament have come from dead-ball situations, a statistic not lost on Andersson.

“Set-pieces will be one key factor. For the first time I feel we meet a country who's more or less on a par with us in that respect,” he said.

“It's a holistic approach. You need to get everything right, not one individual detail.”