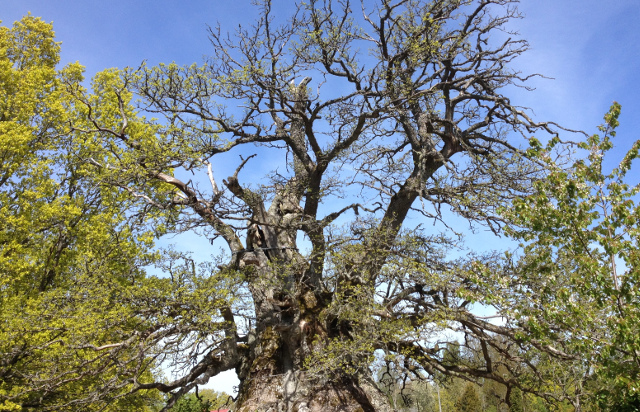 The Kvill Oak, which even featuredThe Kvill Oak pictured in 2015. Photo: Jerry Svensson/Kalmar county administrative board

The exact age of the Kvill Oak – also known as the Rumskulla Oak , growing near Vimmerby in southern Sweden – is not known, but in the 1930s it was established that it was around 950, which makes it older than a millennium today.

After several tough years, it is still clinging on for dear life.

“I didn't think it would make it until this summer, but it has still got a branch with green leaves,” Torsten Ungsäter, the former official tasked with looking after it, told Vimmerby Tidning.

But the county administrative board is not ready to give up on the elderly plant just yet, despite its health having deteriorated almost every year since 2012 – until it showed a spark of life this year.

“It is definitely not well. But what has happened in the past year is that there has been no difference from the year before. And that's the first time since 2012 where its status is more or less the same. A couple of strong branches are alive in one part of the tree,” Jerry Svensson told TT.

Nobody knows when those branches will die: next year or in ten years depending on circumstance.

Some 13 metres in circumference, the tree is a big tourist attraction. One of the largest and oldest still living oak trees in Europe, it has even featured on the big screen: the sex scenes in Swedish filmmaker Vilgot Sjöman's at the time highly controversial film 'I Am Curious (Yellow)' (1967) were shot here.

In 1950 its trunk almost split, but a local blacksmith braced it with strong steel cables. Similar action was taken in the 1990s. It has also struggled with fungal diseases and leaf-eating caterpillars in recent years.