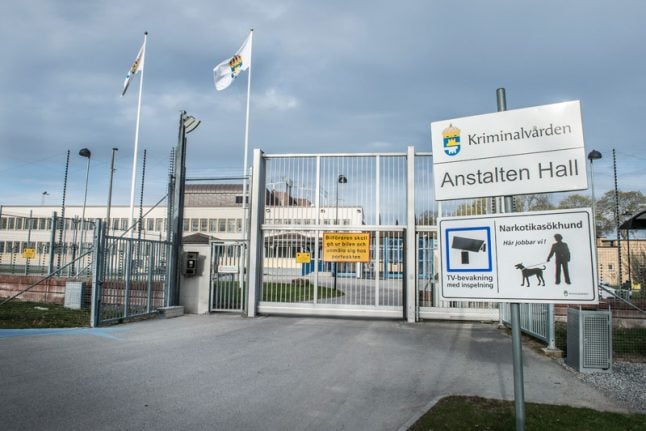 Photo: Lars Pehrson/SvD/TT
With the nation’s prisons at around 95 percent capacity, attacks on prison staff are increasing. There were 91 reported incidents in which staff members were targeted by violence in 2017, a 65 percent increase from 2015 figures.
Violence amongst inmates is also on the rise, with the 327 cases in 2017 representing a 39 percent increase.
“The violence is not growing linearly along with the prison population. It is growing exponentially,” Fredrik Wilhelmsson of the Swedish Prison and Probation Service (Kriminalvarden) told SVT.
Wilhelmsson added, however, that the high occupancy numbers may not be the only reason the figures are up so dramatically. He said prison officials have become better at reporting attacks.
But for Gothenburg prison officer Leif Kyldal, the lack of space within the prisons seems to be the primary factor behind the rise in attacks.
“We have fewer opportunities to move inmates from areas where they shouldn’t be. It may be that they display violent behaviour and shouldn’t be placed among other inmates. That in itself can create problems,” he told SVT.
READ ALSO: Sweden needs hundreds of new prison cells: Justice Minister
Sweden’s rapidly filling prisons – capacity has jumped from 85 percent to 95 percent in just four years – is a problem officials had predicted. Justice Minister Morgan Johansson said in December that the nation would need hundreds of new prison cells and detention spaces in the coming years in part because of tougher penalties.
With police getting more resources and the punishment in areas like weapons crime more severe, he said that adding hundreds of new prison cells will certainly be necessary, and may not even be sufficient.
“Hundreds is not a lot in this context,” Johansson told news agency TT. “The big challenge of the next mandate period will be ensuring that the penal system is shaped so it is capable of taking in those who are now sentenced, and rehabilitates them so that they do not return to crime.”
According to the Swedish Prison and Probation Service, the increased prevalence of crime behind prison walls is also leading to the discovery of more hidden weapons as prisoners feel the need to arm themselves against attacks.
The number of seized weapons has more than doubled in just four years, officials said. Most of the weapons are homemade, including filed toothbrushes and sharpened pieces of plastic that have been broken off food trays.