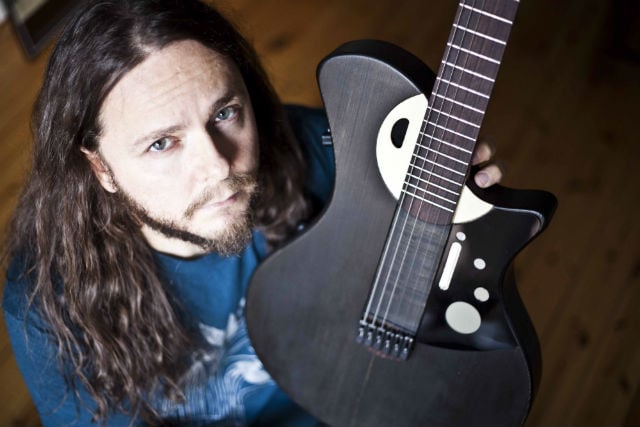 Italian national, Benincaso began his career studying at the prestigious Antonio Stradivari School of Violin Making in Cremona, Italy. He worked building guitars for many years before taking a leap of faith and moving to a country he previously couldn’t locate on a map.

“I wanted to change everything in my life. I wanted to go to a place I knew nothing about. I was fascinated by the Nordic countries and I’d never visited Sweden before,” he says.

He explains that he didn’t know whether he would end up staying for weeks or years.

“I was around 30 years old and just thought, ‘why not?’ I had two one-way tickets: one for me and one for my guitar.”

His journey, however, wasn’t always so straightforward. When Michele arrived, he spoke neither Swedish nor English, so the innovator tried an unorthodox method to find work.

Michele wandered around the city with a photograph of his guitars, seeking out a business that was keen to work with him. After a couple of days, he ended up in the largest guitar store in Sweden.

“I presented what I was working on, I said ‘Look, I build these guitars, I come from the Stradivarius School and I would like to work here’. I had my 10-second pitch and I was not able to say much more because my English was really bad!” he recalls.

Luckily, his qualifications spoke louder than words and he was offered a freelance position.

In order to begin work as a freelancer, however, Michele was required to start his own company. Luck was on his side and he soon made some connections with others in the industry who advised him to go to the Swedish Tax Agency (Skatteverket) to register himself as a sole trader (enskild firma).

The process, he recalls, was extremely simple.

“That was my first step as an entrepreneur in Sweden. I considered it very, very easy,” he says.

It was just the beginning of Michele’s entrepreneurial journey. With a keen interest in music tech and after months of late nights spent in the basement of his apartment, experimenting with tech devices and sensors, MIND Music Labs was launched in 2014. The aim was to create the guitar of the future. Start your own company in Sweden at verksamt.se

Michele quit his job at the guitar store and worked for a year for free, whilst finding talented employees to join the team.

He says the hiring process is relatively simple. The first step is to register yourself as an employer with the Swedish Tax Agency (Skatteverket). Once registered, you can begin to hire staff, including yourself.

Each month you will deduct and report taxes on behalf of your employees and pay social security contributions on their salaries.

The Swedish Public Employment Service (Arbetsförmedlingen) offers a free support service, including advice and assistance with recruitment. In some cases you can even receive financial support during the hiring process.

Once the MIND Music Labs team had been formed, they began work on their award-winning ‘SENSUS Smart Guitar’ but soon realised that the software had to be created from scratch. In order to do that, they needed to develop a full music operating system.

Michele says their ELK music operating system is the music tech equivalent of what Android is for mobile.

“It’s a platform that can run in different musical instruments which makes it very easy for a developer to build apps and for a user to upgrade and connect.” As the scope of the company grew, so did the team. After securing initial investment Michele was able to build a prototype and hire himself and a couple of extra team members.

“The hiring was not easy at all. The main reason is that in Sweden there are a lot of people working with technology, but we are a very specific segment. It’s music and technology,” says Michele. “We’ve only got one Swedish guy and the rest are from elsewhere in the world, because it’s so hard to find exactly the profile we needed.”

Hiring in Sweden? Check out verksamt.se

Things became increasingly difficult when he began to hire engineers from outside the EU.

Michele recalled reading about employees of music tech heavyweight Spotify being forced to leave Sweden just a few months earlier as a result of work permit issues. It was only when he found himself in the same situation that he understood the disruption it can cause.

“We had a huge work permit issue with one of our developers. He had all the documentation in place, he was fully hired, he did his master’s thesis with us, everything was in order, but he had to go back to India in January. Now he’s finally coming back,” he says.

He believes startup companies should be given more consideration in these situations.

“It’s a huge problem for us as a startup to have one of our key employees not working.

When you have five people developing and one of them who is a core developer has to move to the other side of the world for four months, it doesn’t make things easy at all,” Michele adds.

He offers a word of advice for employers looking to source their talent from outside the EU.

“Before hiring someone that is not an EU citizen, you need to check everything. Get that information before starting the process because you can easily find yourself in a situation where you end up without one of your core employees and there was nothing we could do but wait,” he says.

Become an employer at verksamt.se

He attributes a lot of what he’s learnt to the tight-knit, sharing startup community in Sweden.

“The startup network has the knowledge and probably 80 percent of questions are the same for everybody. You need to go through the registration and hiring process. There is a path that is common for every company so if you develop a network, sometimes it’s just easier to have a coffee with someone and ask them for advice,” he explains.

He says that, now that he’s been through the process, he isn’t as phased about hiring international talent.

“We are definitely less scared if we need to hire someone who is not from the EU. Still, it’s not straightforward but at least we know the path. If anyone needs some tips for hiring outside of the EU I am always happy to give advice.”