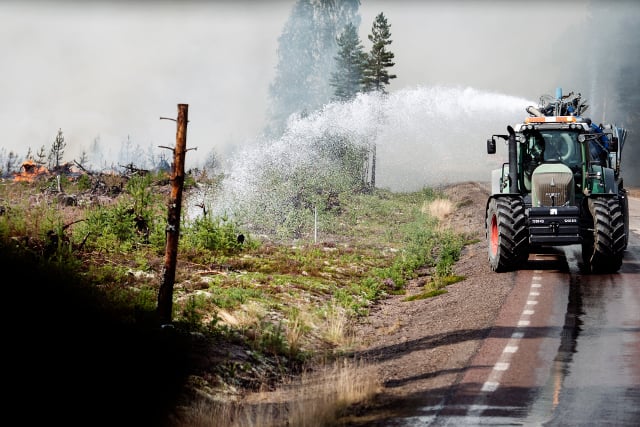 A tractor helping with the extinguishing work in Färila. Photo: Erik Simander/TT

Not only is it particularly warm in Sweden at the moment, the heat also arrived early. While May can often be an up and down month where even the odd spell of snow isn't unthinkable as far south as Stockholm, this year was a stark contrast. Sweden experienced its hottest May on record, and several cities saw their hottest individual May days since records began 150 years ago.

June provided some brief respite, but the heat returned as the month rolled into July, with many parts of the country registering temperatures of 30C or above for weeks in succession. Malmö in May. Photo: Johan Nilsson/TT

The rain stayed away

It's not only warm, many parts of Sweden have also been exceptionally dry this summer. That created an “extreme risk” for forest fire outbreaks as early as May, and the lack of rain is now so bad that the government is even considering state assistance for farmers struggling with the conditions. Combine dry terrain with high temperatures and a lack of frequent rain, and the conditions are ripe for forest fires to spread, but the human factor shouldn't be overlooked either.

Many of the fires are thought to have been started by people using disposable barbecues, despite a ban on lighting them and any other kind of open fire in the majority of municipalities at the moment. On Friday afternoon firefighters were tackling 24 different wildfires in Sweden, and across the month of July there have been three times as many fires as in the same period last year.

Though there have been wildfires across the length and breadth of the country this summer, the three worst affected regions are in central Sweden – Gävleborg, Jämtland and Dalarna.

In Älvdalen, Dalarna, efforts to extinguish a major forest fire moving through a target-practice area were hindered by the presence of undetonated shells and an evacuation order was put in place for the immediate area. In Ljusdal, Gävleborg, some residents have had to evacuate the area, as have those living in parts of Härjedalen, Jämtland and Nordmaling, Västerbotten.

Rain is expected this weekend, but the fire risk in southern Sweden (which was initially spared the brunt of the fires) has increased. The map below shows where fires burned as of 3pm on Friday.

The number of 'Important Messages for the Public' (VMAs), including evacuation orders and warnings for heavy smoke, was at 5 on Friday afternoon, but last week it was at 13 which is a record according to SOS Alarm.

Firefighters are working tirelessly to try to contain and extinguish the fires, with the Armed Forces assisting in some instances (even dropping a bomb on one fire), but weather conditions haven't made life easy for them, and personnel numbers are stretched.

Thousands of volunteers have also offered to help. The Local spoke to some of those involved in the volunteer efforts last week.

Assistance has also come from other countries. Norway has sent helicopters to help extinguish blazes from above, and firefighting planes have also been called in from Italy. France, Germany, Poland and Denmark are also among the countries that are providing assistance. Article updated at 3pm on Friday.