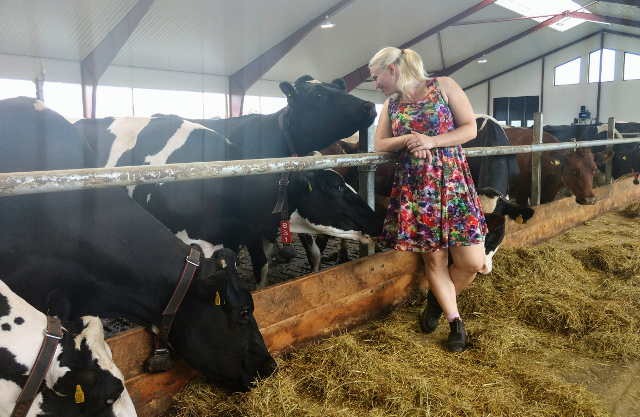 She tells The Local she grew up “in the barn” on her family's dairy farm in Olofstorp near Gothenburg. Their cows are well cared for and even under normal conditions she finds it hard to let go of even just one of the animals.

“Cows are like dogs, they have personalities,” she smiles as one of them tries to smooch her through the fence.

But due to an unusual drought affecting Sweden, she says she may have to send 18 out of her 120 cows to slaughter this year. Like many in Sweden, the dairy farm is quickly running out of food for the livestock.

“I cut all (the grass) I had and it's still not enough,” Ehrman's father Ronny Johansson tells The Local over the phone, adding: “there hasn't been a proper rainfall in weeks”.

Ehrman and her father are not the only ones worrying.

The grass isn't growing, because not enough rain has fallen. Some regions had 80-100 percent less precipitation than normal in July, according to national weather agency SMHI. The Swedish government has promised to provide financial aid to farmers, but the amounts and time frames remain unclear.

Desperate for emergency solutions, some Swedish farmers set up the Facebook support group 'Foderhjälpen' to help each other feed their animals and share information about the situation.

The group grew by more than 25,000 members in just over a week, connecting Swedes with animal food suppliers from Poland, the Netherlands, Germany, Britain and the Baltic states.

Many municipalities have offered farmers to cut the grass in council-owned urban areas, such as parks. But according to Gothenburg City Council's property management administration, there has been little interest so far. Farmers say that despite availability, such grass could contain metal or rocks, which could kill the animal.

“It hasn't been this bad for over 20 years,” Ehrman sighs.

“It's inspiring that farmers try to help each other, but the situation is pretty dark.”

'Extreme event that occurs quite rarely'

Per-Uno Karlsson, a farmer from Synneröd in western Sweden and one of the moderators of 'Foderhjälpen', explains that it is hard to be prepared for such a summer as the one the agricultural sector is currently facing.

“Few farmers can afford to keep silage that covers the need for more than one year. It's also impractical,” he tells The Local.

He adds that he doubts that the industry would be able to adjust quickly if such weather continues in the future.

According to SMHI's climate scenarios, the annual mean temperature in Sweden is predicted to grow steadily from now until the year 2100. But the results, obtained by studying different model calculations, are not weather forecasts, the agency adds.

Markku Rummukainen, professor at Lund University's Centre for Environmental and Climate Research, describes the drought as an “extreme event that occurs quite rarely”.

He tells The Local it can be compared to the summer of 1992, “the worst in modern times”. But these events do not provide scientists with enough data to clearly link them with climate change.

Such droughts can happen “with or without climate change”, he says, but nevertheless emphasizes that preparing for future scenarios is important regardless of but also because of climate change.

Sweden has already become warmer – the effect is most visible in winters. In a long-term perspective, a warmer climate implies that summers, especially in the south-east of Sweden, will increasingly get drier.

“That doesn't mean we will be caught like this every year, but the conditions will be drier which may be important for people who are dependent on water: city planners, farmers or businesses,” says Rummukainen.

“Climate change is something that needs to be dealt with, not worried about.”