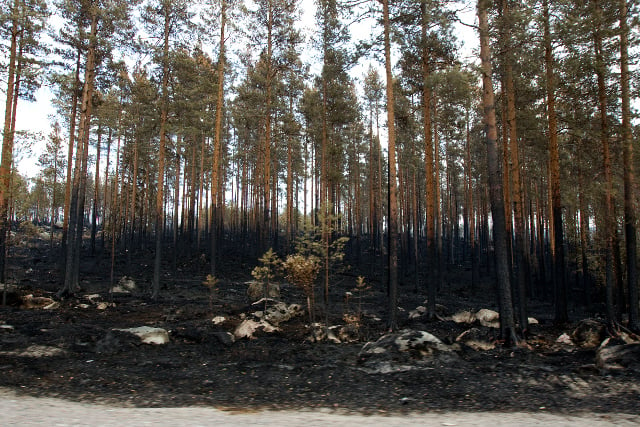 A forest damaged by fire in Gävleborg. Photo: Pernilla Wahlman/TT

The total number of wildfires wreaking havoc across Sweden's forests and countryside has dropped from around 80 last week to 21 this morning (figure updated at 9am on Tuesday).

But authorities warn that the risk of more fires breaking out is still high, and maximum temperatures in large parts of Sweden are expected to stay above 30C in the coming days.

Several counties have now extended their barbecue bans to also include grilling at home in your garden, including Kalmar, Gotland, Gävleborg and Värmland. In Stockholm, barbecuing is currently only allowed in your own garden if there is no risk of the fire spreading, and it is recommended that you avoid it altogether.

This is significantly larger than the 14,000 hectares that burned in a 2014 fire in Västmanland, which at the time was Sweden's most serious wildfire in 40 years.

SWEDEN'S GREEN SOUL: Why forests are vital to the Swedish culture and economy

Sweden, where usual summer temperatures are closer to 23C, is under-equipped to deal with this kind of crisis and has been getting help from several other countries in the EU and EEA.

In Dalarna firefighters are investigating the possibility of using snow to contain the blaze, taking it from supplies stored by ski resorts in the area ahead of the early winter season.

The government said on Tuesday that it intends to give Sweden's Civil Contingencies Agency the resources needed to compensate the worst-hit municipalities financially in the wake of the fires.

Meanwhile in Finland's northernmost Lapland province, fires have ravaged woods and grassland close to the border with Russia.

Norway, which experienced its hottest May temperatures on record, has also seen several small fires, and one firefighter was killed on July 15th trying to contain a blaze.

Fires have raged for five days in Latvia, destroying more than 800 hectares in the Baltic state's western regions.

In Greece, 50 people died and 170 were injured in wildfires ravaging woodland and villages in the Athens region, as authorities rushed to evacuate beaches along the coast on Tuesday.

There were fears the toll may rise further, as people remained unaccounted for.