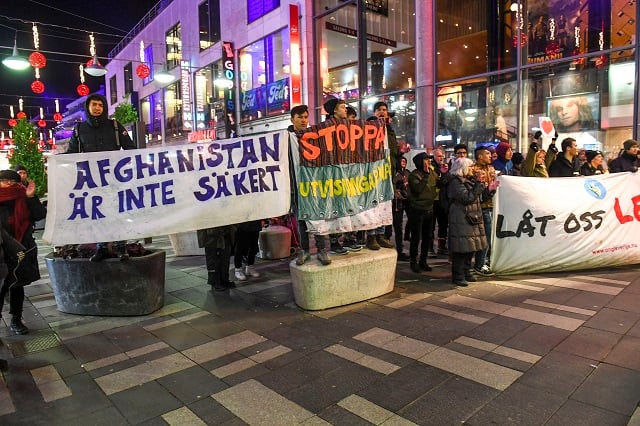 A protest against the Swedish government's policy of deportations to Afghanistan. Photo: Fredrik Sandberg / TT

Student activist Elin Ersson protested against the government's policy of deporting some rejected asylum seekers to Afghanistan by boarding the flight one Afghan man was due to be sent home on.

Ersson protested at Gothenburg's Landvetter airport with a group of around 25 other activists, part of the group 'Sittstrejken i Goteborg'. Then, she got on board the plane – the group had already raised money for her ticket – and refused to sit down until the man was let off.

The flight was scheduled to travel to Istanbul, from where the man was set to take another flight to Afghanistan.

“All I want to do is stop the deportation and then I will comply with the rules here. This is all perfectly legal and I have not committed a crime,” said Ersson in the video, which has now been watched more than 2 million times on Facebook.

Ersson said the man would “most likely get killed” if forced to return to Afghanistan.

An employee could be heard telling her to sit down and stop filming, and another passenger challenged her and tried to take her phone away. However, others on board the flight supported the student activist, and the reaction on social media has been similarly mixed with many hailing the student a “hero” but others criticizing the method of protest.

In a statement shared with The Local by Gudrun Romeborn from the protest group Sittstrejken i Goteborg, the group said: “We would together like to bring forward the bigger picture, beyond this deportation […] And what this story shows is that only one person is needed to spark action but many are needed to make a change.”

The group also confirmed that they had also originally intended to stop the deportation of a young man they heard was due to be deported to Afghanistan on the same flight, and protested by handing out information at the airport, contacting Turkish airports to try to get the flight cancelled, and offering emotional support to the man's friends and family.

However, the younger man was not on board Ersson's flight, and Romeborn said his family received a phone call from him in Kabul one day later, saying he “had been put in a police car with shaded windows, driven to Stockholm, and put on a plane to Afghanistan”. When Ersson boarded the flight, she realized that only the older Afghan man was on the plane.

News of Ersson's protest has been shared worldwide, with coverage in dozens of different languages and praise from politicians and other rights groups.

On Monday evening Ersson said in a Facebook post that she would not be answering any more calls from journalists, adding: “The deportation was stopped, I don't know anything more than that.” She did not respond to The Local's request for comment, but told the Guardian that she believes the man was deported from elsewhere in Sweden.

A police press spokesperson told The Local that such protests against deportations were uncommon in Sweden, and added that it would not normally be enough to stop the man's deportation.

“I can't comment on specific cases, but it would usually be postponed to be carried out at another date,” she explained.

In 2017, 9,062 rejected asylum seekers were ordered to leave the country by the Swedish Migration Agency, press officer Pierre Karatzian told The Local. The figure for 2018 so far is 4,292, although this may not reflect the exact number of deportations carried out, since deportations are carried out by the police and may change, for example if new information comes to light or it is not possible for them to return to their home country.

Activists have been campaigning against the Swedish Migration Agency's continued deportations of Afghan asylum seekers for months, including previous protests at the country's airports.

The Swedish Foreign Office's official travel advice to residents is to avoid all travel there “due to the security situation”, but the Migration Agency maintains that parts of the country, including its capital Kabul, are safe enough for asylum seekers to be returned there.

In April this year, a group of rejected asylum seekers including a majority of Afghans broke out of the detention facility where they were being held. This was the biggest such escape in several years.

And in August 2017, hundreds of young Afghans held a sit-down protest against the deportations in Stockholm, which lasted for several weeks. They were joined by hundreds of members of the public, and Swedish teachers have also protested the planned deportations.

OPINION: 'Those who manage to get out of Afghanistan should be given the benefit of the doubt'