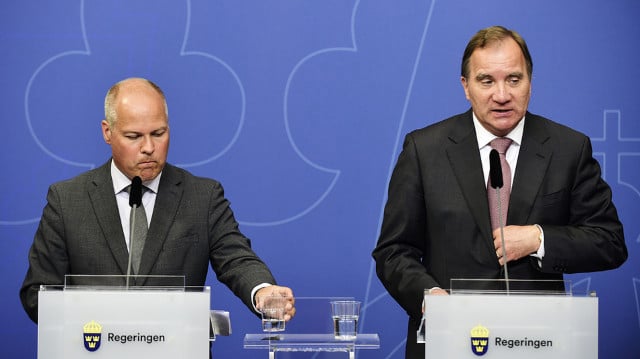 “The risk of new fires is great. The situation continues to be serious,” Löfven said at a press conference following a meeting of the Swedish government on how to cope with the situation.

“It takes so little for a fire to start now,” he added, going on to thank everyone who has worked to contain and extinguish them across the country, and promising that the government will provide all the support necessary.

Sweden's Civil Contingencies Agency (MSB) has been given the green light to request further firefighting assistance from abroad, but as EU resources are being prioritized according to the countries with the greatest need, that could mean asking for assistance from outside the union, the PM explained.

READ ALSO: Here's where evacuations are taking place due to wildfires

According to Löfven, Ukraine and Turkey are among the nations Sweden could request help from, but the final decision will be made by the MSB. The costs of such requests are difficult to predict: “When the bill comes we'll pay it. Sweden has strong state finances.”

The Swedish leader did not rule out the purchase of water bombing planes, which at the moment have been borrowed from countries like Italy and Portugal as part of the EU's civil protection mechanism. A total of eight nations are currently participating in extinguishing fires in Sweden.

The amount of financial support given to affected Swedish municipalities has now been decided by the government, the PM explained, with 300 million kronor ($34 million) to be dished out, and relevant NGOs given an additional 25 million kronor.

“Those who have suffered from the drought and fires should not be left to their fate. Rather, we will stick together now,” Löfven said.

Justice and Interior Minister Morgan Johansson, who also participated in the press conference, pointed out that predicted rain at the weekend would not change the risk of further wildfires, but could help with extinguishing those already burning.

“If the forecast for rain sticks it would be very positive for extinguishing work.”

And while the minister believes the dry, hot summer filled with fires and crop failures could be a rude awakening for some regarding climate change, he thinks it is too early to say what long-term impact it will have.

“The analysis will take a long time, at least until the autumn,” Johansson concluded.