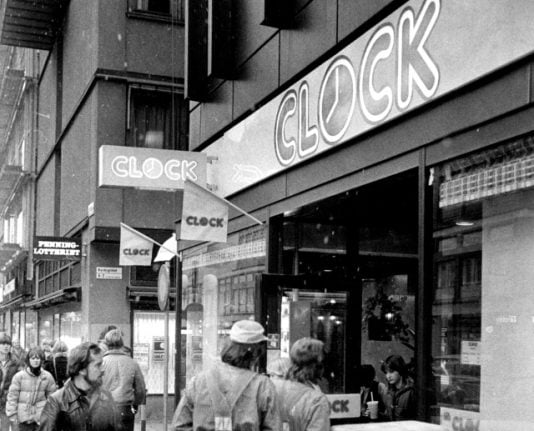 Why a state-owned burger chain?

Sweden was a very different place in the 1970s, at the tail-end of an almost uninterrupted period of government dominance by the Social Democrats that started in the 1920s. Around the same time in 1973, McDonald's opened its first branch in Sweden, and as the popularity of American-style hamburgers started to grow, state-owned restaurant company SARA (Sveriges Allmänna Restaurangbolag) decided to act in an effort to beat the American giants to the punch in the Swedish market.

SARA bought a number of small burger restaurants previously owned by a short-lived franchise version of Carrols and converted them to fit their new chain concept, Clock. The new chain's red and yellow colour scheme was a clear indication of its inspiration.

What did they sell?

Some of the burgers also came with a Swedish twist: a bacon burger was topped off with curry dressing for example in an attempt to appeal to Sweden's unique tastes. Similarly, Clock also sold “Big Dream”, a burger topped with slices of pineapple, tapping in to the Swedish habit of combining fruit with meat (kept alive today in a host of odd pizza topping combinations).

The chain managed to compete well enough with the American giants during the 1970s and 80s. There were even franchise branches in Norway, Finland, and perhaps more incredibly, Japan and Kuwait.

In the 1990s SARA sold Clock to hotel firm Provobis, who subsequently listed the restaurant on the stock exchange in 1994, but the excitement didn't reach expected levels. Economic problems (in part thanks to the continued unstoppable rise of American chains) meant that by the late 90s most of Clock's locales had closed their doors. The last branch, located between Nyköping and Norrköping, closed in 1999.

Could Clock come back?

The Clock brand still holds a certain nostalgia for some in Sweden (one of the most popular discussion forums in the country has a 32-page thread on the subject that has been running for over a decade), and there have been various attempts to re-launch the burger chain in some form since its demise. The brand was bought by a readymade food company in 2007, and when that firm went bust in 2014 the rights to the Clock brand even ended up for sale on Sweden's classified ads site Blocket.

In 2016, Linköping restaurateur Magnus Nystrand revealed he had purchased the brand and planned to open three Clock restaurants in the city within a year, but the dream died soon after. Instead, a year later it was revealed that a woman in Härnösand had purchased the rights from him in turn, with the goal of opening the first new Clock branch in that town in 2018, then expanding to other locations further down the line. Perhaps there's still life in Clock after all.