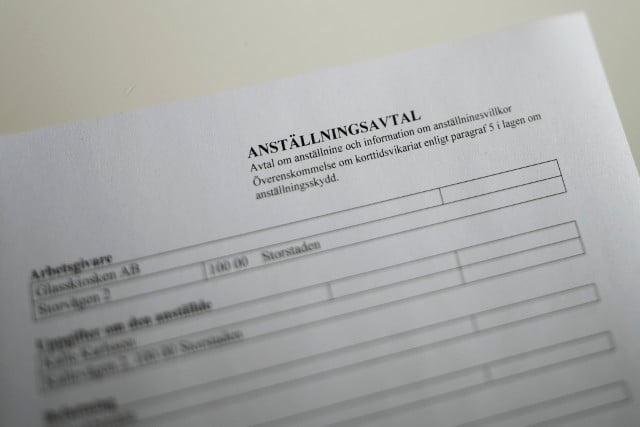 It can be difficult to grasp the nuances of Swedish form-filling. Photo: Stina Stjernkvist/TT

After two years in Sweden, I've come to the conclusion that I will never write a book entitled, “The Immigrant's Fast Track to a Perfect Life in Sweden”. If I were to write a book based on my experiences, it would be more along the lines of “The Immigrant’s Guide to Slowly Figuring Out How Things Work in Sweden”.

Going into our third year, I'm realizing that being an immigrant can be a lot like being a parent at times. In both cases, no sooner do you settle down and get comfortable then something unexpected immediately demands your attention.

READ ALSO: The immigrants you've probably never heard of who made Swedish history

A year ago, I was recalling the bureaucracy we had experienced during our first year, and happily anticipating moving forward without the frustration that came with it. With a personal number, identity card and driving license, I expected I was as official as I could possibly be. But, oh, how wrong I was.

While applying for a couple of stand-alone university courses, I was surprised at a request for another form of identification: a residence card. Fast forward to my biometrics appointment for said card, when I was asked if I was replacing an existing card. No, I told the guy, I had always thought my ID card was my residence card. When we lived in Spain, I explained, my identity and residence card were one and the same. He nodded, knowingly, shrugged his shoulders and casually said, “Yeah, I understand”.

The question on my mind is how for nearly two years I not only didn’t know I needed a residence card, but had never been asked for it. My husband, an EU citizen, wonders how we weren’t told I would need a separate residence card when we applied for our personal numbers or even our identity cards.

Ironically, I never did actually need the card to register properly for the courses since other documentation served the same purpose. And now that I have the card, I’m told I’ll mainly need it if I travel, even though my driving license has already served that purpose just fine.

It's this sense of learning protocols and procedures in Sweden through personal investigation – or even by accident – rather than through official outlets that has characterized our second year here.

Another good example of this is that during the time I was registered with Arbetsförmedlingen (the Swedish Public Employment Service), no one at that agency ever provided me with any information about how to become recognized as a freelancer (or even suggested it), even though it was clear that was the type of work I was doing. It wasn't until I discovered more on my own that I pursued this path.

Surprisingly, registering as a self-employed person was one of the easier tasks I accomplished in our second year in Sweden. Although struggling through the Swedish-only application process wasn’t exactly stress-free, the fact that I had a person providing me with one-on-one support and feedback was reassuring and helpful. Before I knew it, the process was complete and – miracle of miracles – I had a pretty good understanding of how the whole system worked.

I only worry that my sense of confidence belies some other unknown, and I can’t help but feel like I’m constantly waiting for the other shoe to drop. As with the residence card, I don’t know what I don’t know until I know it. As a result, I enter our third year in Sweden with less self-assurance than I had a year ago. Perhaps what I felt then was false confidence, but at least it felt better.

What I am certain of at this point is that I’m still figuring things out, and there’s a lot I need to learn. The last two years in Sweden have been wonderful in so many ways for our entire family, and we are all fully invested in our life here. Although we didn’t expect the process of integration would be fast, I admit that I had thought our path would include more abundant and clearer markings along the way.

READ ALSO: 'My children will have advantages in Sweden I may never have myself'

When my husband and I lived in each other’s respective countries, one of us always knew how to get things done, or at least knew where or how to find out with ease. In Sweden, we have learned that there is a “way” of doing many things that is accepted and understood among those who know it, but can be like solving a puzzle for outsiders. Without a doubt, this has been a source of frustration for us, even as we love most everything else about living here.

Each immigrant's journey is going to be different, so even if there were an expert guide to navigating quickly to the “perfect” life in Sweden, it would require a lot of different maps with numerous deviating paths. So perhaps my family’s slow and sometimes bumpy route is not really so unusual. After all, as the Taoist saying goes, “The journey is the reward”.