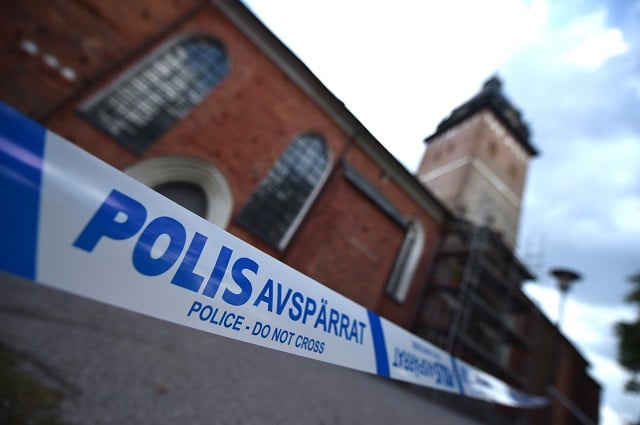 The cathedral, which was closed off for the investigation. Photo: Pontus Stenberg / TT

Two unknown criminals stole 17th-century royal crowns from a cathedral in Strängnäs, one hour from Stockholm, where they were kept in a locked and alarmed display case. The suspects were seen fleeing from the scene on women's bicycles and then a motorboat on Tuesday.

Police searched the area, both by water and air, and worked through the night on Tuesday but so far the jewels have not been recovered.

“Nothing has changed since yesterday,” police spokesperson Stefan Dangardt told The Local on Thursday afternoon, one day after the theft was registered with Interpol in an effort to make the stolen goods impossible to sell.

“There are some media reports that we have found the stolen goods but I cannot confirm that,” Dangardt added. “We are continuing to work with the information that we have, and continuing the investigation.” Several Swedish media reported that police have carried out house searches in an area north of Stockholm, but Dangardt could not confirm this. He said no arrests had been made and no evidence had been found.

However, he said forensics experts had made progress in their investigation of the crime scene, which was closed off on Wednesday. Dangdardt told The Local that the forensic team had found “traces” both in and outside the church, but said it was too early to say what kind of evidence these might be, or what exactly the traces were.

The revelation follows an earlier report from Swedish daily Aftonbladet, which said it had received information that police had found traces of blood in the cathedral.

The crowns were made for the burial of Kind Charles IX and his wife Christina, and date back to the early 1600s. A royal orb was stolen along with them, and the gold jewels are decorated with silver and pearls.

It's not the first royal heist in the area around Lake Mälaren. In 2013, a crown and sceptre used in the funeral of Sweden's King Johan III were stolen from nearby Västerås. They subsequently turned up in two large rubbish bags at the side of a highway following a tip-off to police.