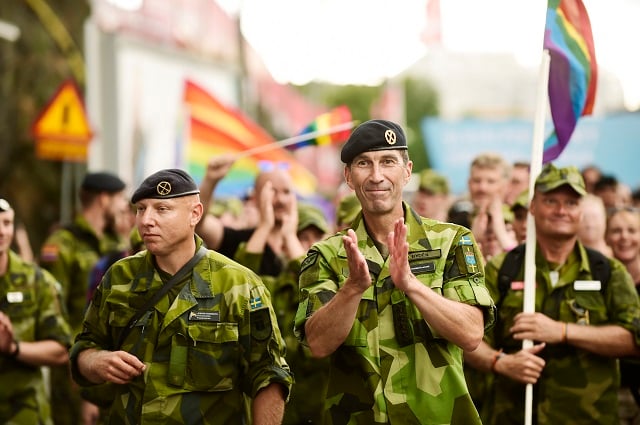 The armed forces supported the event, participating in the march with a float bearing the slogan 'We don't always march straight'.

And when they passed by Stockholm's City Hall and Elvis Presley's Suspicious Minds began to blare out from the speakers, Supreme Commander Micael Bydén couldn't resist joining in.

You can watch the performance in the video below, shared with The Local by soldier Robin Krüger, who also participated in the parade.

“I knew [Bydén] would be there because he always is, but I didn't know he could do Elvis like that. It was so awesome!” Krüger told The Local.

“I think he really embraced the parade and the simple values that it stands for: that people have a right to chose how and with whom they live. And I think that's one of the things our armed forces are there to protect,” he added.

In total more than 60,000 people participated in (and 600,000 people lined the streets to watch) the parade, which included floats with music and dancers and marchers in rainbow-coloured and glitter-covered costumes. It took over three hours to make its way from the City Hall to Östermalm's IP, which was hosting the EuroPride Park.

EuroPride celebrations continue in Sweden later this month, with a range of events planned in Gothenburg between August 14th and 19th.

With additional reporting by Viktoriia Zhuhan

READ ALSO: Ten of the most exciting events to check out at EuroPride