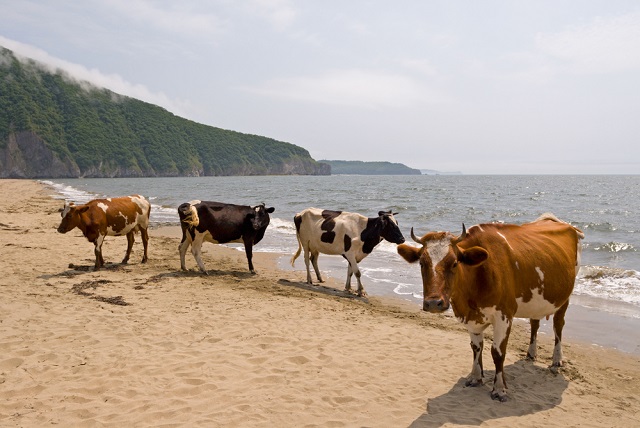 Cows bathe alongside nudists at one of Sweden's beaches. File photo (not the beach referred to in the article): Stas_K/Depositphotos

But the cattle have just as much right to be there as the human visitors, staff at Växjö municipality's culture and leisure department decided.

Nudists who use the dedicated beach and swimming spot at Stora Pene, Växjö, had complained that the animals' presence was unhygienic and could pose a health risk.

The municipality cited Sweden's extreme heat over recent months as one of the reasons landowners needed to be able to bring cows and other animals to the beach in order to cool down.

Sweden's summer heatwave and prolonged drought has seen farmers across Sweden struggle to find food for their livestock, with some forced to send animals to slaughter early as a result.

“When it's this dry, you don't want cows to be brought to slaughter out of necessity. They need to be able to bathe, eat and drink,” Peter Bengtsson from Växjö municipality told SVT Småland, explaining the decision.

However, he admitted it wasn't “completely OK” for the cows to be in the water if there were people around who wanted to swim.

Bengtsson added that there shouldn't be any risk of infection, and that the only potential risks would be linked to allergies or damage caused to the ground by the animals.

“If that happens, we'll talk to the landowners,” he said, adding that in any case there was already wildlife at the beach, including birds – “so there's a lot of droppings in the lakes anyway”.

READ ALSO: Drought-hit farmers to get billions in aid from Swedish government