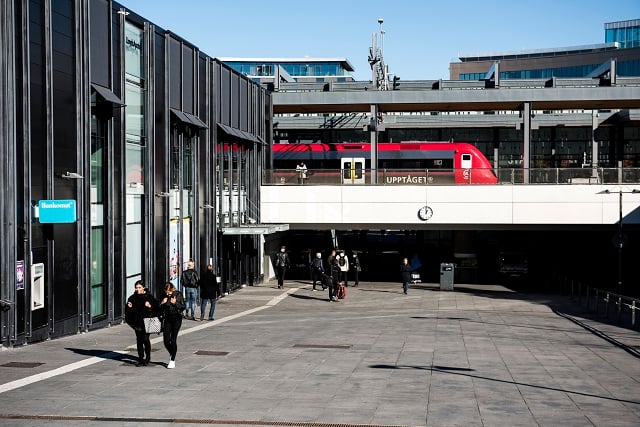 The train station at Uppsala, one of the areas experiencing problems on Thursday. File photo: Pontus Lundahl / TT

Different locations faced risks of fire or buckling on the tracks, as well as heavy storms.

According to the Swedish Transport Administration, the risk of buckling was causing disruption to traffic north of Stockholm, between Uppsala and Uppsala Norra. This had a knock-on effect on routes towards Dalarna and Sala.

“It hasn't been possible to fix the problem due to factors including thunder and lightning over night; it wasn't possible to go out in the storm and fix the issue,” said Denny Josefsson from the Transport Administration.

“It is supposed to be warm in Uppsala during the day, so I expect we won't be able to fix the problem until tonight at the earliest, if it starts to thunder again.”

There were also problems in the far north of Sweden, with a complete stop to train traffic between Kiruna and Narvik in Norway. This was caused by a fire on the Norwegian side of the track. On Thursday morning there was no official prediction of when the route would be back to normal, but a replacement bus service was running.

Several routes in Götaland in southern Sweden were also cancelled for weather-related reasons, due to high temperatures in the area.

These included the routes between Kalmar–Linköping, Värnamo–Halmstad, Jönköping–Värnamo and Nässjö–Vetlanda. These lines were not expected to be running as normal before Saturday morning at the earliest.

The Transport Administration advised affected passengers to get in touch with their train company for up-to-date information about their trip.

READ ALSO: Here's how many trains ran on time in Sweden last year