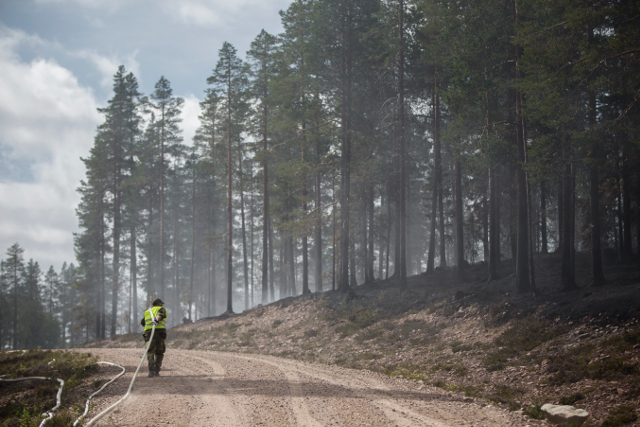 One of the forest fires in Älvdalen this summer. Photo: Adam Wrafter/SvD/TT

The heatwave and drought triggered dozens of wildfires, from the south up to the Arctic Circle as the country registered the hottest month of July in two centuries, with temperatures hovering around 30C.

The Nordic nation, where summer temperatures are usually closer to 23C, is not equipped to deal witht his kind of natural catastrophe and asked for help from Italy, Germany, Norway, Denmark, Poland and France.

An opinion poll carried out by the Swedish consultancy Demoskop between August 2nd and 7th showed that 16 percent of respondents saw the environment as the most important issue, replacing health care on 13 percent.

“It's a shame that drought and fires had to happen in order for the environment to become a major issue,” Michael Arthursson, secretary general of the Centre Party, told daily newspaper Expressen, which published the poll on Thursday.

According to Swedish officials, around 25,000 hectares of forests were burned.

Emergency services SOS Alarm said there were seven wildfires across the nation on Thursday. No casualties have been reported so far and foreign firefighters have left the country.

According to the Demoskop poll, immigration is still the most important issue for voters at 23 percent in Sweden which has registered around 400,000 asylum requests since 2012, a record in Europe.

“If we don't do something about the climate threats then we're going to have hundreds of millions of refugees fleeing hurricanes, drought and crop failures,” she told Expressen.