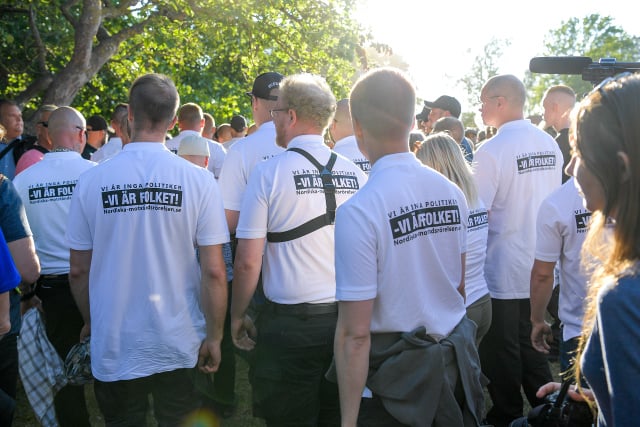 Three women spotted a group of men whom they identified as members of militant far-right organization the Nordic Resistance Movement (NRM) on Wednesday evening, one of the women told Aftonbladet.

“I was so shocked that I said out loud 'oh, it's Nazis', and then one of them turned around and said ‘yes, in the flesh',” she told the newspaper.

A loud argument and a scuffle later ensued between the women and the other group, after the former went to get a rainbow flag and started shouting slogans about equal rights for everyone.

One of the women was then suddenly rugby tackled to the ground from behind. The attacker was immediately seized by a plain-clothes police officer on the scene who witnessed the incident.

The man is now being investigated on suspicion of assault linked to hate crime.

The incident happened shortly after Centre Party leader Annie Lööf addressed crowds in central Visby. Every day during Almedalen Week one of the leaders of each of Sweden's eight parties gives a speech and it is considered one of the most important events in the political calendar.

Lööf, who has among other things spoken out against more restrictive immigration policies, had barely started speaking when she was interrupted by a small group of NRM members shouting “traitor”.

“There's a group of Nazis over there. Let's listen to them for a while,” said Lööf. She paused but when the neo-Nazi group then fell silent in apparent surprise the audience laughed and she resumed speaking.

Any other attempts at interrupting the speech were drowned out by the audience, some of whom formed a wall of people between Lööf and the NRM, who were also held back by police.