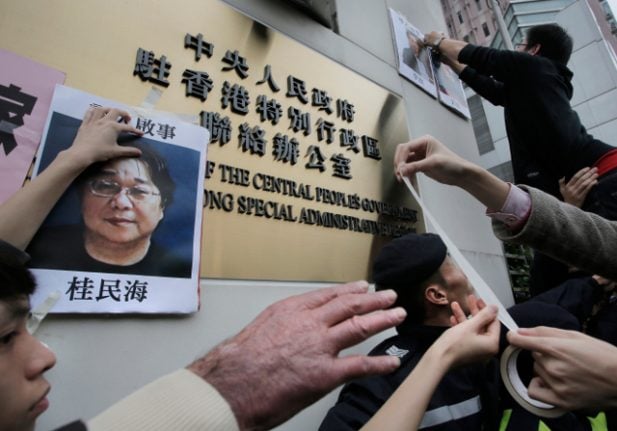 “Swedish medical personnel have on Monday, August 13th, been able to carry out a visit with detained Swedish citizen Gui Minhai. This is welcome,” Swedish Foreign Minister Margot Wallström said in a statement.

He was released in October 2017, but was arrested on a train to Beijing in January while travelling with two Swedish diplomats.

He was reportedly en route to see a Swedish specialist over fears he had the neurological disease ALS.

Wallström, who provided no details about Gui’s condition or Monday’s medical visit, reiterated Sweden’s call for him to be freed.

“Gui Minhai must be released and be allowed to reunite with his family,” she said.

She said Sweden was continuing its “intensive work” in the matter, and said the medical visit would be “followed up in several different ways”.

Gui, 54, first disappeared in 2015 while on holiday in Thailand.

He eventually surfaced at an undisclosed location in China, confessing to involvement in a fatal traffic accident and smuggling illegal books into the mainland.

Chinese authorities declared they had released him in October 2017 but his daughter Angela Gui told AFP at the time that he was under “loose house arrest” in Ningbo.

After his second disappearance into police custody in January, Gui appeared in a video interview in February confessing to wrongdoing and accusing his adopted country Sweden of manipulating him like a “chess piece”.

It was unclear whether that statement was made under duress, but video of his confession showed him flanked by two police officers. A close friend said the remarks were “not to be believed”.

The Chinese embassy in Sweden said in February that Gui was being held in a detention centre in the city.