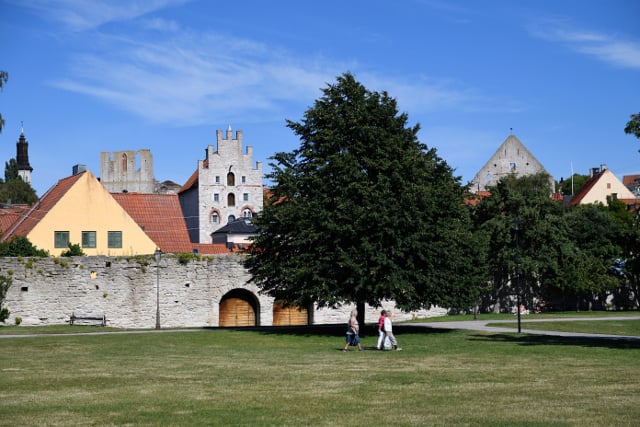 Gotland has been battling a water crisis for years. Photo: Henrik Montgomery/TT

“Why are so many hedgehogs dying?”

The innocuous question came from the nephew as he spotted one more lying immobile along a patch of dried grass. Two months ago the grass blades were green. Over the past few weeks we have seen them go off colour; brown and rough, much like hay. Gotland seen from above in the summer of 2017, and this year. Photo: Rymdstyrelsen/Google/Esa

The drying grass and the dying hedgehogs could be calamities of a searing heatwave on Gotland and other parts of Sweden. But it takes more than one summer to turn the tide. The fact is that Gotland has been staring at a water crisis for a few years now. From 2016 it has been particularly bad. For ten weeks from May to July there was no rain. According to the island's regional authority Region Gotland, since May there has been just 3.3 millimetres precipitation in Visby, compared with 86.3 millimetres in 2017. The lakes and reservoirs that feed the island are way below normal. So is the ground water table.

Gotland, Sweden biggest island, has an 800 kilometre coastline. Yet it lies parched. The irony of this situation is not lost on anyone. Least of all the Gotlanders. Summer is peak business season for the island, which relies heavily on tourism. This is the time when the population of the island swells from 58,000 to over twice the number, testing its already stressed water situation.

More so for Visby, the Unesco heritage town on the island that hosts the much sought after annual political festival Almedalen Week, followed by the party-heavy Stockholm Week and the Medieval Week. Gotland is a popular island for tourists in summer. Photo: Henrik Montgomery/TT

Claudia Castillo, an environmental inspector and resident of Gotland for the past 20 years, says the problem has worsened in the past three years. “It is pretty bad, because on Gotland we use ground water for almost everything. We have a lot of tourists in the summer. So by the end of the summer we are pretty down on water. It is a big shortage. So now we are looking for different solutions, for example using water from the sea and desalinating it,” she says. “You could say this is an effect of climate change.”

In 2016 Gotlanders collectively reduced water consumption in homes by 20 percent. For many, this effort continues. Residents have been advised to take short showers and not use municipal water for their gardens. Independent homes and apartments have begun storing rain water collected through pipes into huge drums for their lawns. The situation throws up a delicate challenge for hotels, guest houses and bed and breakfast owners. Some hotels have had situations were water in shower-heads of higher floors was down to a trickle. Accommodations would like to see to it that their guests are comfortable, while at the same time they need to ensure the scare resource is well managed.

“We are ensuring that all our faucets and our showers don't emit as much water as the old equipment would. So we do measurements every year. Also, during the summer when we really do have shortage of water problem which has been around for three years, we inform our guests about our situation here on Gotland, what we Gotlandic natives do to preserve water, and ask them for help to preserve water. Many of them understand and do it,” says Ernst Wiman, COO of Strand Hotel.

The hotel has also decided to procure their meats for the daily breakfast menu only from the local producers, as farmers don't have enough fodder to keep alive their livestock. Several hotels have pamphlets at the lobby, elevators and at room doors advising guests to take short showers and not to keep the tap running while brushing. Tourists are also being made aware of the water shortage on Gotland even before they arrive from the mainland to the island.

“On my part I have tried to use less water while showering and brushing,” says Fea, a tourist in Visby who preferred to be identified by her first name. “The best way for me to cool off is to take a dip in the ocean instead for taking a shower several times a day,” says her companion.

The concern among the guests is evident. “If we all do our bit it can make a difference. We can take a one minute shower instead of five or ten minutes. Though I don't know why we need to use precious drinking water for washing clothes or in flush tanks. Perhaps sea water can be used for that,” says Stephan Andersson, who regularly visits Gotland in summer months.

Watch the video from Gotland:

For Menette von Schulman, who runs the quaint Hotel St Clemens, there is no other way but to find new ways to conserve water. She has been actively involved in looking for long-term solutions along with other Gotlanders. She says her hotel has managed to reduce its water consumption by 50 percent, and feels change in behaviour plays a big part.

“We need to change the way on how we think of water,” says von Schulman. “Almost every day there have been discussions on how to change the situation and look for solutions. We have a big limestone industry that is taking a lot of fresh water. We need to see how the water can be reused. We also have agriculture. I think we need to combine technical solutions and behaviour along with big investments for us to become sustainable. I think everyone is making a contribution to this and that is very important,” she adds.

Wiman agrees. “Most people who live here know that we all are in the same boat. We have to help each other out and that is quite a common thing for Gotland,” he says. Last week council authorities Region Gotland sent text messages to the islanders of the 'over-consumption of water', especially in Visby. Hoteliers say tourists have responded to the water saving efforts positively. Some have even called up hotels in advance to ask if they could carry drinking water. But how long can the island chug along in crisis mode?

“To put it in perspective, we have a problem with fresh water, but we also have a sea that is not feeling very good because of the algae. We also need to think of the water that is surrounding us. It is more like if we don't have fresh water in our taps and if we don't have our sea that people can come and swim in, then we won't have any tourists coming. So this is a big pressure for us. We need to think now and for the future,” says von Schulman.

What has always worked for Gotland is collectivism. The island knows it needs to act fast and at multiple levels. For the tourists. For its own people. And for the hedgehog, the regional animal of Gotland.