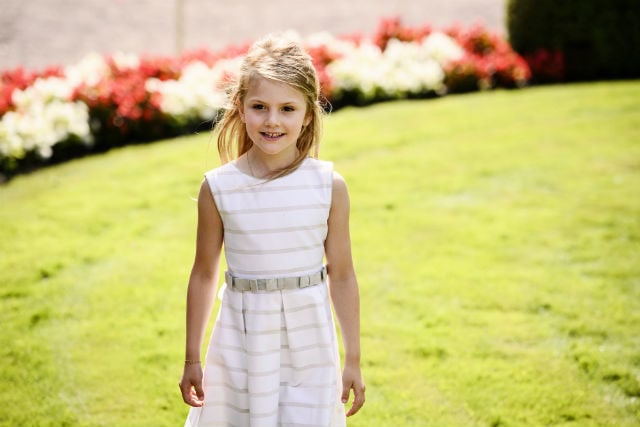 Princess Estelle at the celebrations for Crown Princess Victoria's birthday in July. Photo: Erik Simander/TT
In 1984, Crown Princess Victoria started at Smedslättskolan, a state-funded school open to all, ten minutes' drive from her home at Drottningholm Palace.
Estelle’s classmates at Campus Manilla will, in contrast, be drawn largely from Stockholm's richest families.
“A significant portion of Sweden's GDP goes there,” one parent told the Dagens Nyheter newspaper in June.
The charter school was founded as a non profit-making venture by the property magnate Knut Pousette in 2013, backed by some 18 million kronor ($2 million) in private donations. It has since become a go-to school for Stockholm’s super-rich.
Like other Swedish charter schools, Campus Manila is theoretically open to all on a first come, first-serve basis, with the Swedish government paying the cost of educating each student.
But according to an investigation by Dagens Nyheter, the school has been using a loophole intended to help refugee children get places at charter schools to let the children of favoured millionaires jump the queue for places.
Margareta Thorgren, press spokesman for the Royal Court, told Expressen that Estelle was now preparing to start on Tuesday as planned .
“Like many other school children, she's been spending this time preparing herself with her family,” she said.
READ ALSO: Five reasons Sweden's Estelle is the coolest princess ever
She told Expressen in May told that the choice was “a decision the Crown Princess and Prince have made.”
“No one in the Royal Family has gone there previously,” she said. “It’s a relatively new school.”
Campus Manilla, which based in a mansion close to an area of millionaires’ estates on the Stockholm island of Djurgården,  has been rocked by controversy in recent months.
The school’s founder Knut Pousette and the headmistress Maija Möller Grimakova both resigned from their positions due to public conflicts between the board, management and the millionaire parents who paid for the school to be established.
Maija Möller Grimakova told Expressen in May that she was well-prepared for her high-profile new pupil.
“We look forward to many fantastic school years together,” she said. “All parents choose the school which is best for their children and this is no exception.”
New headmistress Carina Hagström-Bergh has so far not spoken to the Swedish newspapers.
FOR MEMBERS: Parenting in Sweden: How to choose and apply to the right school