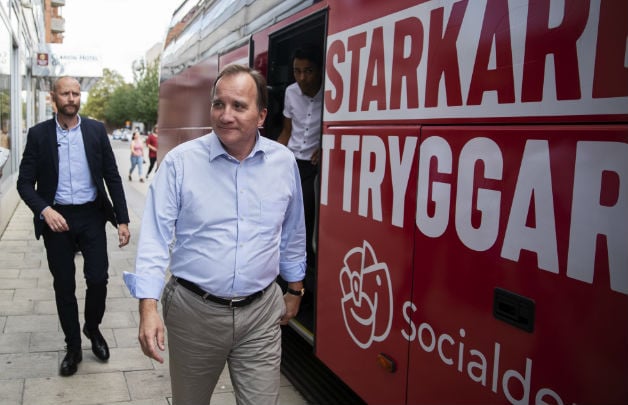 Swedish Prime Minister Stefan Löfven on the campaign trail. Photo: Nils Petter Nilsson/TT
“Those who are the very, very best off, and who earn mostly from capital income can contribute a little more,” Löfven told the TT newswire in a party leader interview. “We shall come back with a more concrete proposal.”
Löfven denied that the plans to increase tax on the rich were a response to the former communist’s Left Party’s recent success, with recent polls giving it the support of more than ten percent  of voters, nearly double what it got in the 2014 election.
“No, this is traditional Social Democratic politics: from each according to their ability, to each according to their need,” he said.
He said the new tax proposals would be included in the Social Democrat election manifesto issued in a week or so, but said he didn’t expect it to on it own lift the party’s vote share.
“It’s not as simple as just having a ‘gamechanger’, but there are many who are asking for it,” he said.
According to Lövfen, the real choice the electorate faces in September is between parties who want to cut tax and parties who want to invest, and not about immigration.
The Social Democrats are now committed to a tighter immigration politics, he said, repeating his predication that the number of refugees coming into Sweden would be significantly lower than the 29,000 a year envisaged by the Swedish Migration Agency.
“It has to be on a level with other EU countries,” he said of the how strict migration policy should be. “It can’t be any different from the rest of the EU.”
Löfven said he didn’t plan to help the centre-right Alliance parties take power by supporting them in any way, meaning that they can only do so by teaming up with the anti-immigration Sweden Democrats. “They can forget it,” Löfven said.
The Social Democrats have pledged to spend at least 30bn SEK on welfare up until 2022 if they are elected, but the National Institute of Economic Research argues that Sweden’s municipalities need some 70bn SEK.
Löfven would not say if the party planned to increase its spending pledged.
“We have so much to do in the welfare area, we have divisions in our country and at the very least those with big capital incomes can pay more,” he said.
Löfven said he was confident that he could still be Prime Minister after the election, despite his party’s poor performance in the polls.
“No, but look at the block, I wouldn’t say that that looks so bad,” he said. “My judgement is that we are on an upward trend.”
He said that if the Alliance parties wanted to take power with he direct or indirect wupport of the Sweden Democrats, they could do so. Otherwise they would have to help a Social Democrat government pass budgets and other legislation.
“If they want to build a majority where the Alliance parties rely on direct or indirect support from SD, that’s up to them,” he said. “I believe, however, that far, far inside the centre-right camp, there’s a strong aversion to become either actively or passively dependent on SD.”