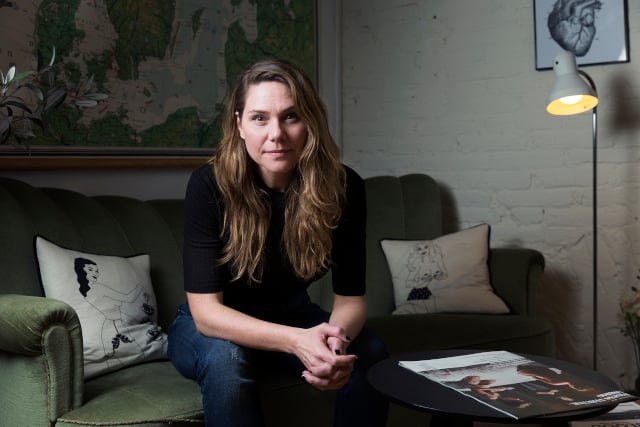 It was in Lust's native Sweden, while a student at Lund University, that the first seeds of her unconventional career in the adult industry were sown. “I studied Political Science and Gender Studies and was reading Hard Core: Power, Pleasure, and the Frenzy of the Visible by Linda Williams when I had my 'lightbulb moment'. It was the first book to treat pornography as a genre with its own history and as a specific cinematic trend.” This sparked her lifelong interest: promoting sex-positive feminism.

Though the definition of feminism has been widely debated, Lust sees it as simple: “For me feminism is the belief that women and men should have equal rights and opportunities in all aspects of life. It is sisterhood. Supporting another woman's right to do whatever she wants – however different another woman's expression may be from yours. That includes sexual freedom, which is a basic human right.”

It's a particularly sensitive topic at the moment, with the #MeToo campaign continuing to dominate headlines across the world following widespread accusations of sexual assault, but Lust is reluctant to consider pornography as having a negative impact in and of itself.

“Movements such as #MeToo show what we all knew before: that there is a gender dysfunction and a power imbalance in society that is visible in every single field but this is not a new phenomenon. Power abuse is not a male trait; it's a human trait, and we have always lived in a culture of toxic masculinity that allows and encourages men to perpetrate acts of violence and disrespect towards women. This is the story of humans,” she adds.

“With more female pornographers making films, we can offer diversity and represent all the different parts of society and the people in it, people will be able to see themselves in those films, to see the sex they have, to be inspired, become educated, and receptive to the huge range of different sexualities out there. And most importantly they won't be exposed to one version of sex, sexuality and gender representation.”

Having experience of living both in Sweden and Spain, Lust has observed noticeable differences in attitudes to sex between the two countries: “Sweden is one of the more progressive parts of the EU in terms of attitudes towards sex education. Swedish people are definitely more willing than Spaniards to speak about sex and sexuality since sex education is treated with ease and it has been compulsory in schools since the 1950s; something that is hard to understand here in Spain.”

She is quick to note that Sweden should not yet be held up as a prize example of a flawless approach to gender and sexuality, claiming that Sweden's approach to sex work is “completely off. The 'Nordic Model' [in which the act of selling sex is decriminalized, but buying sex is punishable by the law] does not understand, nor care for, the well-being of sex workers.”

“Sex workers have repeatedly stressed that the legislation is not beneficial for them at all. In fact Amnesty International conducted research with sex workers living under these laws and found that criminalization laws of sex work lead to human rights abuses against their community. I firmly believe decriminalization is absolutely essential to improve working conditions in the sex trade and I feel Sweden is very far from this point and shows no willingness to speak about it.”


Erika Lust and her crew on set. Photo: Private

Lust sees attitudes towards sex and consent in Spain progressing much more quickly:

“Spain has typically been behind Sweden in this area, but things are definitely starting to change. I truly believe that this is the year feminism will take centre stage in Spain. This International Women's Day in Spain was overwhelming; there were hundreds of protests across the country, a general 24-hour strike, walkouts by five million workers, and huge demonstrations of hundreds of thousands of people. There was a lot of media coverage and its success placed Spain at the cusp of a global movement. And especially in the wake of the awful La Manada ('Wolf pack') case, the discourse is starting to evolve.”

Lust's community is growing and evolving, too. In 2016, Lust invited aspiring adult filmmakers to pitch their own story ideas via her website, with successful applicants offered the chance to see their concepts made reality. So far, she has financed more than 25 guest-directed films, with an investment of more than 250,000 euros.