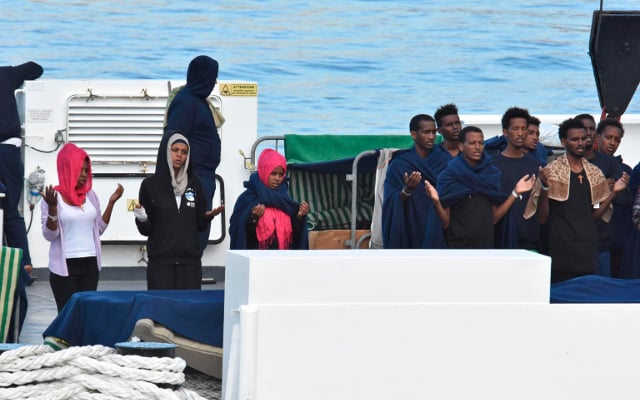 The people on board have not been allowed to disembark in Italy. Photo: Orietta Scardino/ANSA via AP

Italian coastguard ship Diciotti arrived at Sicily late on Monday night after picking up 177 people near the southern Italian island of Lampedusa, including an estimated 30 unaccompanied minors.

The vessel was allowed to dock, but the migrants have been denied permission to disembark.

The country’s hardline interior minister, Matteo Salvini, has threatened to take them to Libya unless other EU countries take them in, despite reports of serious abuse in North African detention camps.

Swedish Prime Minister Stefan Löfven on Wednesday confirmed reports by Swedish public radio that his centre-left coalition government had declined requests to let the migrants on board seek asylum in Sweden.

“Other countries have to step up and show that they want to take responsibility,” he told newswire TT.

He said Sweden, which received around 163,000 asylum requests in 2015, took on a “huge responsibility” at the time but has since tightened its migration policies. By the end of 2018, the Migration Agency expects 23,000 people to have applied for asylum in the Nordic country this year.

A spokesperson for the EU's migration commission told Italy's Ansa news agency this week that member states had been approached about the situation and “we are working to find a solution as soon as possible”.

“The people aboard have suffered abuse, torture [and are] victims of human trafficking,” commented the spokesperson for the UN's refugee agency in Italy, Carlotta Sami. “They urgently need assistance and the right to claim asylum. A fundamental right, not a crime.”

According to the latest figures from the UNHCR, the crossing from North Africa to southern Italy is becoming more deadly: more than 1,500 people died making the journey between January and July, or one in every 17 who tried. The death rate tripled this year compared to the same period in 2017.