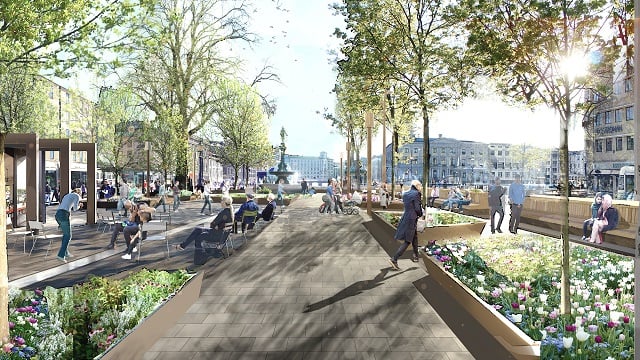 An image of how Brunnsparken should look after the redesign. Image: White Arkitekter

“It's easy to buy drugs in Brunnsparken and in Nordstan, and the police are not doing anything about it,” says Julia, 29, from Gothenburg, who has been working at a doughnut kiosk at Brunnsparken for six years.

Earlier this summer, during one of her shifts a murder and a fight took place, and Julia says she welcomed the police and security officers who started patrolling the area afterwards.

People tend to avoid Brunnsparken, Rikard Ljunggren from Association of Property Owners in Gothenburg tells The Local. “It's rare that you see anything other than doves and rats there, and a public toilet is rarely used as a toilet: it's a drug shop,” he says.

This centrally located area in Gothenburg has for years been exposed to the highest rate of crime in the city – and now the authorities have a new plan, to fight crime in Brunnsparken through a redesign. Gothenburg is spending about 20 million kronor on a project to make the park more safe and welcoming, deputy project leader Emma Johansson tells The Local. If everything goes as planned, construction will begin in January 2019 and will be completed in spring or summer 2019.

There will be fewer trees, making the area more open, and the new ones planted will have lighter foliage. Plants will be elevated to improve visibility. The lighting will be improved and paths for pedestrians will be more clearly lit. New wooden seating areas are also planned, and meeting places will be made more open.

Already, the Association of Property Owners has added decorations to the trees so that residents can feel the change coming.

But the development should go beyond design, argues 62-year-old Margarita from Gothenburg. “I would like to have some extra police officers or security personnel here on late evenings and nights,” she says.

In a written comment to The Local, Gothenburg police officer Helene Ramsmo emphasizes that crime rates have gone down in all areas of the city in recent years, including the Centrum district where Brunnsparken is located.

But this central area, which includes Brunnsparken, shopping malls, and the train station, is still where most crimes in the city are carried out, the same statistics show (see graph below).

Ramsmo added that local police are countering narcotics following nationwide efforts and carry out patrols in the park, though no separate budget has been assigned to Brunnsparken specifically. Ramsmo wasn't able to provide the numbers of police officers that regularly patrol the area.

“We have an assigned resource. The size of our resource is established by the government. I strongly believe that we can go further if we walk along in cooperation with, for example, the town,” she writes.

Additional efforts fall on the shoulders of NGOs and property owners, Julia Härkönen from Gothenburg City explains. For example, the city and NGOs have set up a support room in Nordstan for vulnerable young people.

Vasakronan is one of the property owners in Brunnsparken that contribute to the transformation. Kristina Pettersson Post, the regional director, says she's optimistic about the plans, and one sign that things are already going in the direction is the simple act of selfie-taking.

“Last winter people started taking selfies in Brunnsparken. I have never seen this before! This signals that things are improving, little by little,” she says. An impression of how the redesigned park should look. Image: White Arkitekter

When residents notice that the authorities are renovating and re-designing the park, they may feel more secure, professor Vania Ceccato from the Department of Urban Planning and Environment at KTH in Stockholm tells The Local. But she also warns that it won't necessarily lead to an immediate drop in crime rates.

Crime prevention through environmental design (CPTED) approach can be traced back more than 50 years, according to Ceccato, who has carried out research in the area. For example, an open line of sight in a park, so that visitors can be seen by workers at cafes or shops, can help create what is called “natural surveillance”. Ensuring that there are fewer isolated spaces in a public space can reduce crime since there is nothing to hide behind.

“But new design does not mean that you will attract the right people – the public space still must be available for everyone. People that commit crime don't want to be displaced. Sometimes crime just moves elsewhere,” Ceccato says.

It's also important to take into account the different aspects to the area: as well as a park, Brunnsparken is home to a transport hub and a shopping centre, and the different areas attract different demographics and different types of crime. While walls are target of vandalism, for example, the bus stops are where pickpocketing happens, Ceccato says.

Design is only one part of the equation, with other factors playing their part too. Indeed, in addition to the redesign, Gothenburg City also plans to collaborate with local business and property owners and police in other efforts to increase security.

So once Brunnsparken gets the planned new features, the next step is to see how these interact with the area's functionality and socioeconomic context, Ceccato concludes.