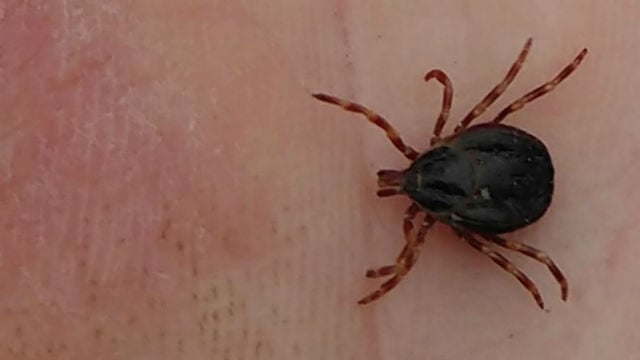 Fully mature adult giant Hyalomma tics have never been seen in Sweden before. Photo: National Veterinary Institute
The three Hyalomma ticks were sent to a team led by Giulio Grandi, a researcher at the National Veterinary Institute in Uppsala, by their discoverers in Landskrona in Skåne, Nyköping in Södermanland, and Koppom i in Värmland.
When fully engorged with blood, they can grow to up to 2cm in length.
“They are giant ticks,” Grandi told Swedish broadcaster Sveriges Radio. “They are very fast, and they are hunters who do not just sit and wait for their host, but instead actively look for a host to attack.”
The ticks can spread Crimean–Congo hemorrhagic fever, outbreaks of which kill up to 40 percent of those affected.
Ann Albihn, an associate professor at the Swedish University of Agricultural Sciences, who is also working on the project, said that the chances of contracting the deadly virus in Sweden remained very low.
She said the species may already be adapting to Sweden.
“This tic has perhaps discovered a new trick for surviving the the tough Swedish climate,” she said. “They have perhaps learnt to spend the winter inside.”
Hyalomma ticks are thought to have originated in the north of Iran or in Central Asia, and have since spread into Asia, the Middle East, Southern Europe and Africa.
Grandi said the Hyalomma ticks could have been carried to Sweden by migrating birds.
The tics are being sent to Grandi by post as part of a multi-year project studying how climate change might affect diseases in Sweden.
Some 2,000 living and dead ticks have been sent by enthusiasts wishing to aid the research.
Albihn said that the project was already challenging the previous understanding of tick distribution in the country.
“We have strong indications that there are ticks much further north and higher up in the mountains than we had thought,” she said.