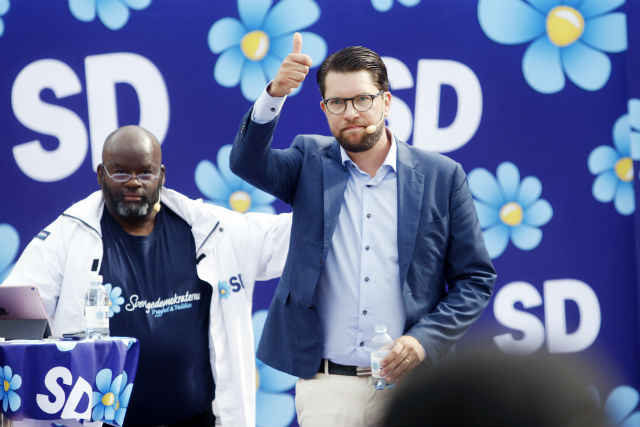 Sweden Democrat leader Jimmie Åkesson greets supporters at a rally in Sundsvall. Photo: Mats Andersson / TT
With two weeks to go to the election, opinion polls suggest the anti-immigration Sweden Democrats (SD) could sweep around 20 percent of votes, making them the second- or third-biggest party.
That could give SD — an offshoot of the neo-Nazi movement but now clamouring for political legitimacy — significant influence over Swedish politics.
SD has said it is willing to collaborate with either the left or right, as long as it can shape the country's immigration policy.
However, it will have a hard time wielding any newfound clout. While some parties on the right-wing have occasionally appeared tempted to court the SD for informal support to pass legislation in parliament, none of
them seems ready to forge a more formal collaboration with a party still seen as pariahs by a large majority of Swedes.
The far-right first entered parliament in 2010, garnering 5.7 percent of votes cast. Four years later, they more than doubled their score, taking 12.9 percent of votes and 42 of the 349 seats in the 2014 election.
SD also holds one of three deputy speaker positions in parliament, a post occupied by Bjorn Söder, a hardliner who in June said the country's Jews were “not Swedes”.
Founded in 1988 and headed since 2005 by Jimmie Akesson, SD appeals to young voters and those disillusioned by social democracy, as well as those in declining rural areas where industries, schools and maternity wards are shutting down.
Prime Minister Stefan Löfven's Social Democrats are expected to remain the country's biggest party, but polls suggest they are headed for their worst election result since proportional representation was introduced in 1911. Theyare seen winning around 25 percent of votes, down from 31 percent four years ago.
Social inequality
While Sweden's economic indicators all look rosy — unemployment is at its lowest level in a decade, growth is forecast at around three percent this year — income inequality is growing faster than in any other OECD country, a thorn in the side of a nation that has long prided itself on its egalitarian values.
“These new social gaps have to be addressed to keep Sweden cohesive. If we do that, then there's no room for extremism,” Goran Persson, who served as Social Democratic prime minister from 1996 to 2006, told AFP on Friday.
The Social Democrats, which have dominated Sweden's political scene since the 1930s, are paying the price after welcoming in more than 300,000 asylum seekers since 2015 — the highest number in Europe per capita, pushing the Swedish population over the 10 million mark.
At the height of the migrant wave in the autumn of 2015, the Scandinavian country was overwhelmed: migrants were crammed into overcrowded school gyms, social services were swamped, and asylum housing centres were torched by angry locals.
Three years later, after the government sharply curbed its refugee policy and suspended family reunifications, the situation has calmed down considerably.
The massive chaos predicted by those opposed to the initially-generous refugee policy never materialised. But Sweden now finds itself confronted with the challenge of integrating its new arrivals.
Prime Minister Löfven has vowed that if re-elected, he will pursue “a migration policy that holds up in the long term, and that has the backing of the Swedish people”.
As expected, SD gives the Social Democrats a failing grade on immigration.
Its policy “has divided society, fuelled the sense of exclusion, bled the welfare system dry” and “harmed national security”. Sweden saw its first terrorist attack in April 2017 when an Uzbek asylum
seeker mowed down pedestrians in Stockholm in a truck attack that left five people dead.
Breaking barriers
The battle for the post of prime minister is being fought between the outgoing Lofven, a metal worker who rose through the ranks of his union before taking on the highest post in government, and the head of the opposition conservative Moderates, Ulf Kristersson, whose party is neck-and-neck with the
far-right in the polls.
Kristersson, an economist and former communications director, took over as Moderates leader in October 2017 after Anna Kinberg Batra was forced out by a faction of the party for breaking the “cordon sanitaire” around SD, saying she was ready to negotiate with it on a case-by-case basis.
Kristersson has insisted he has no intention of doing that. Instead he plans to form a government with the three other centre and right-wing parties — without SD's support.
The latest polls put the “red-green bloc” — the current two-party coalition government comprising the Social Democrats and Greens, as well as the Left Party — ahead of the right-wing four-party Alliance (Centre,
Liberals, Moderates and Christian Democrats).