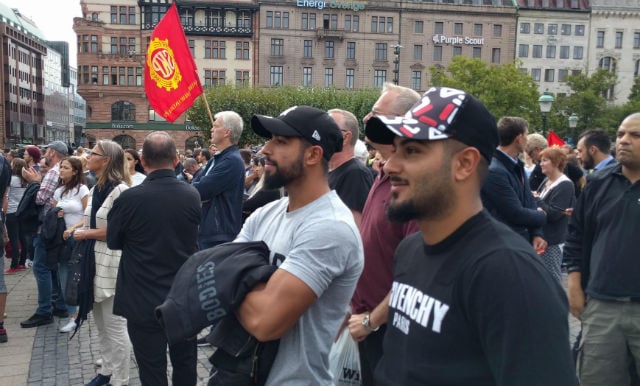 Adam, 24, and Mohammed, 25, watch Sweden Democrat leader Jimmie Åkesson speak on Friday. Photo: Richard Orange/The Local
“It's you who want to build that!” Mohammed, 25, shouts out when Åkesson accuses Muslims like him of trying to create a parallel society.
The leader of the Sweden Democrats is speaking in Sweden's third-largest city as part of an election tour which has seen protesters attempt to pelt him with eggs in Falkenberg, and a rapturous reception in the party stronghold of Landskrona.
READ ALSO: Protesters target Sweden Democrats and Alternative for Sweden with eggs
In Malmö, the mood is somewhere in between, with a big crowd of supporters and a small but energetic group of protesters.
“Jimmie, you think we have so many problems in Malmö,” reads one sign. “Well, go away and we'll have one less.”

Åkesson speaking in Malmö on Friday. Photo: Johan Nilsson/TT
Opposition to an anti-immigration party should be no surprise in a city where more than half the people have at least one parent born abroad, and an estimated 20 percent are Muslim.
But Adam and Mohammed, two second-generation Malmö residents of Palestinian origin, have come more out of curiosity.
“I'm against the Sweden Democrats, but I'm here to listen to what ideas they have, because they're going to be big after the election,” says Adam, 24. “There's a lot that can happen.”
Mohammed says what frightens him about the party is its focus on Islam as a problem in and of itself.
“One shouldn't mix religion and politics, they don't belong together,” he says, “And SD have connected these two things. They don't talk just about immigration, they talk about Muslims and Islam.”
He points to the article Åkesson wrote in Aftonbladet in 2009 in which he called Muslims “our greatest foreign threat“.
“You just can't say that sort of thing when there's nearly one million people who are Muslim living in this country,” he says. “I can't judge the whole of Christianity from one event. That's where racism comes from.”
ANALYSIS: Just how far right are the Sweden Democrats?

Åkesson speaking in Landskrona in southern Sweden on Friday. Photo: Johan Nilsson/TT
The party has, however, been making remarkable progress among immigrants in Sweden, increasing its share of the vote of those born abroad to 12 percent this May from two percent in the May before the 2014 election.
Partly, it has done this with the party's ideology of “open Swedishness”, a cultural nationalism open to all regardless of where they were born or the colour of their skin.
Throughout his tour, Åkesson has been introduced by Jonas Chongera, a black, Congo-born former pastor who represents the party on a municipal council in Värmland.
“We all know people with backgrounds in other countries, among our friends and even in our families,” Åkesson says at one point in his speech, underlining that he is against high levels of immigration, not immigrants themselves.
But soon afterwards, he begins to accuse Muslims of trying to force Sweden to introduce gender-segregated swimming pools, and complains that kindergartens in Gothenburg have been forcing children to wear the hijab.
Mohammed is baffled by the party's support among immigrants. “The most crazy thing is this 12 percent who have gone with SD,” he says. “Some of these people don't even have citizenship, some of them only have residency, and they want to vote for a party that might send them out!”
Despite this, the two are sanguine about the high chance that the party will sweep up as many as one in five votes in Sweden's general election on Sunday.
“I'm frightened for the future of course,” Adam concedes. “But at the same time, we are citizens. So as long as we don't have problem here in Sweden, we feel OK. But others who have come here more recently fleeing war, they could be in trouble.”