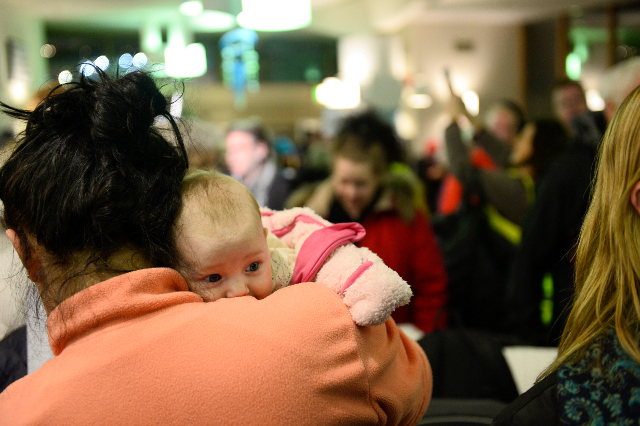 Sollefteå residents protest against the closure of their maternity ward. Photo: Izabelle Nordfjell/TT

Asia Nader didn't know whether to worry more about being diagnosed with a hole in her heart at the age of 21, or having to wait a year for Swedish doctors to fix it.

“I completely fell apart when I found out,” she told AFP, remembering the long agonizing months until she finally had her operation in June this year, one month before her 23rd birthday.

Sweden has the fifth-highest life expectancy in Europe and cancer survival rates are among the continent's highest, according to 2017 OECD figures.

But Swedes are frustrated over their universal healthcare, one of the main pillars of their cherished welfare state, with long waiting queues due to a shortage of nurses and available doctors in some areas.

“There is a risk their faith in the welfare state will be eroded,” she told AFP.

Swedes see access to healthcare as one of the most important issues in the September 9th general election, polls suggest.

Prime Minister Stefan Löfven's Social Democrats, the largest party, are on course for a record low score, after losing voters disgruntled over rising immigration putting a strain on the welfare system to the far-right Sweden Democrats.

Swedish law stipulates patients should wait no more than 90 days to undergo surgery or see a specialist. Yet every third patient waits longer, according to government figures.

Patients must also see a general practitioner within seven days, the second-longest deadline in Europe after Portugal (15 days).

The 2016 nationwide median wait for prostate cancer surgery was 120 days, but 271 days in the northern county of Västerbotten, official figures show.

Swedes also complain about not being able to see their own regular general practitioner – and the ensuing lack of continuity – as a growing number of doctors and nurses are temporary hires employed by staffing companies.

Some 80 percent of the healthcare sector is in need of nurses, according to official data.

Online services where patients see a doctor via webcam, have mushroomed as a result.

“Every time you seek help you also see a new doctor… This makes us lose time on assessments and follow-ups,” Heidi Stenmyren, president of the Swedish Medical Association, told AFP.

In Sollefteå, the premier's northern hometown with nearly 20,000 residents and in a county run by the centre-left, the only maternity ward was shut down last year to save money.

With the closest maternity ward now 200 kilometres away for some, midwives offer parents-to-be classes on how to deliver babies in cars – which some have since done.

FOR MEMBERS: Why family-friendly Sweden is talking about a maternity care crisis

Sweden has the EU's third-highest spending on healthcare – 11 percent share of its GDP – and the heart attack survival rate is above the OECD average.

“I get worried sometimes when people disparage Swedish healthcare as if it didn't work at all… It's not black or white,” Löfven told Swedish television SVT.

But the number of hospital beds has declined in recent years, as has the average length of stay.

Frustration peaked this year when it emerged that the bill for centre-right-governed Stockholm county's over-budget state-of-the-art New Karolinska Hospital would tick in at 61.4 billion kronor ($6.7 billion) – the most expensive hospital in the world.

And yet patients have had to be transferred to other overcrowded hospitals because some of the facilities are unusable.

“In only five years, we will have 70,000 more people aged 75 or older… and that comes with more frequent illnesses,” Löfven told AFP.

The opposition Moderates, which governed for two consecutive terms before the Social Democrats took power in 2014, meanwhile want to reintroduce a law that rewards counties for shortening queues.