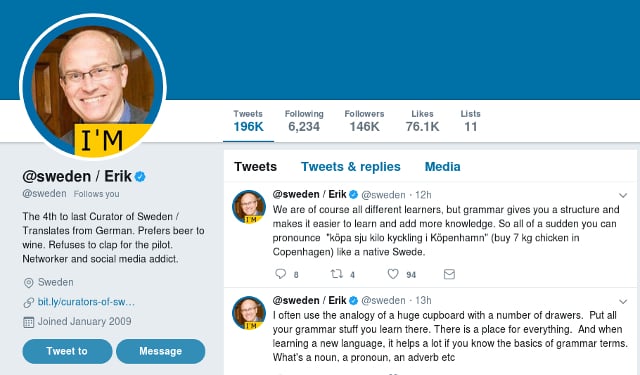 Sweden grabbed global attention in 2011 when it became the first country to put its own official Twitter account into the hands of its citizens, with a different curator taking charge of it every week.

Launched by the Swedish Institute and VisitSweden, it was widely hailed as “the world's most democratic Twitter account”, allowing users to present diverse images of their country. US talk show host Stephen Colbert even used his show to beg Sweden to let him take over the account.

Anna Rudels, head of the department of digitalization and communication at the Swedish Institute, told The Local that they were looking at extending their reach by for example telling more stories in video format.

“The reason why we choose to end the concept is that its geographic reach is simply not enough. The Swedish Institute's job is to communicate with the rest of the world about Sweden and in order to succeed we need a wide reach. Today @sweden mainly reaches people in the US, UK and Sweden,” she said.

The venture has been lauded by the communications industry, with awards at the international Grand Prix, the Clio Awards and two Silver Lions at Cannes Lions, among others. But there has also been controversy.

In 2016 it emerged that its curators had been receiving an increased amount of racist and sexist abuse, with organizers then telling The Local that they could be forced to close the account as a last resort.

Just a few months later it landed itself in hot water after it officially adopted a block list used by one of its curators, who had blocked 14,000 Twitter accounts deemed to be involved in “threats against migrants, women and LGBTQ people” or suspected of right-wing extremist or neo-Nazi links.

The move was harshly criticized after a copy of the list was leaked online, and was found to include members of the Swedish parliament, the Israeli ambassador to Sweden, newspaper Expressen's foreign correspondent Magda Gad and well-known Swedish author Jonas Gardell, among others.

The Swedish Institute apologized and unblocked all 14,000 users.

Still, with more than 146,000 followers around the world, it is safe to say that many of its fans will miss following the curators' tweets about topics as diverse as language, traditions, prepping, business and sport. A total of 356 people will have tweeted around 200,000 tweets on @sweden when the project ends, said the Swedish Institute, with the last curator set to post their final tweet on September 30th.

“Since Curators of Sweden started, the internet and social media have developed at an unprecedented rate. The same goes for our own digital channels. Today we manage more than twenty official Sweden accounts on social media, where we communicate with more than two million followers in English, Russian, Arabic and Chinese on a daily basis,” said Rudels in a statement.

“Every project has an end, and now – after nearly seven years – it is time for us to move on. We will develop new formats where we can reach more people in more countries than before.”

“We are truly grateful to all the curators who have been a part of this project over the years – they have been the heart and soul of Curators of Sweden, and without them this unique project wouldn't have been possible.”