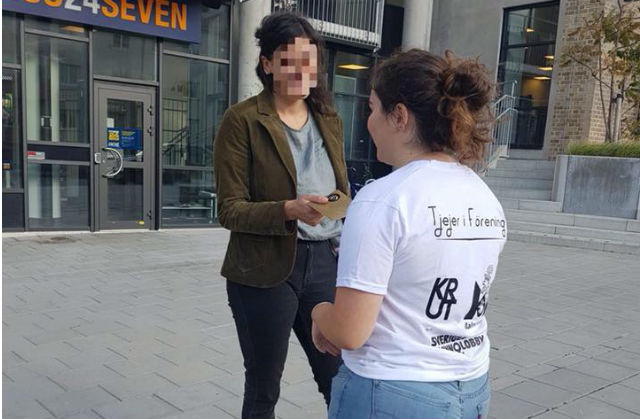 One of the democracy ambassadors at work on Tuesday. Photo: Tjejer i Förening
A man was shot in the Malmö district of Hermodsdal at around 7pm on Tuesday, just seconds before a group of the ambassadors arrived to talk to locals.
“On Tuesday, they were out and explaining to people how you vote for the first time,” Mirlinda Abazaj, project leader for the Rosengård-based charity Tjejer i Förening, told Swedish Radio. “They were especially targeting first-time voters.”
The group were shaken by the experience.
“They feel pretty OK, but they've been a little traumatized,” Abazaj explained. “They have been able to speak to a psychologist.”
By a stroke of bad luck, twenty of Malmö's democracy ambassadors were also out in the district of Nydala on July 3rd when a man was shot dead in the local square.
“One of them was at both shootings,” Abazaj revealed.
Hyrije Matarova, who is leading the project, said that the city had decided to cancel two planned outdoor election events in response to the threat of gun violence.
An indoor event at Mötesplats: HelaMalmö in Nydala will however still take place.
This is the third election in a row that the city has sent out democracy ambassadors, hoping to boost turnout of below 50 percent in some districts. This is well below the national average of 85.8 percent.
READ ALSO: How Sweden hopes to get more foreign-born residents voting