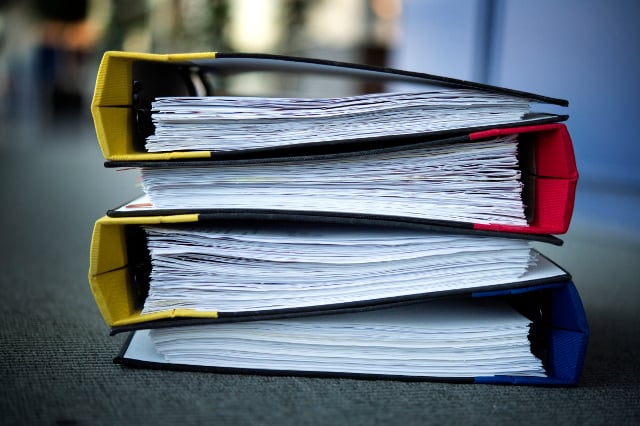 What do the parties want to do to fight Swedish bureaucracy? Photo: Jessica Gow/TT

It is often unreasonably difficult to exist in Swedish society before you have a personal number (personnummer), something which has been criticized by, for example, EU rights organizations. The number is used for taxation, but also for things such as getting a bank account, identifying yourself when going to hospital, or even getting a gym card. What does your party want to do to cut this red tape?

“The Swedish system of personal numbers is extensive and a large majority of both private and public actors rely on it. That could in turn make it more difficult for those who are not staying here long enough to be registered (folkbokförd) in the country. We understand that it can make administration more difficult for many and we note that there are administrative improvements to be made.” “The population registry (folkbokföringen) fundamentally works well and is an important control function when EU citizens come to Sweden to work. But there is also potential for improvement. The difficulty of getting registered as an EU citizen and getting a personal number has been raised as a structural problem on numerous occasions by, among others, Solvit. According to Solvit, the Population Registration Act's requirement for one year's stay means that people who work or study in Sweden for a shorter period of time find it very hard to get a personal number, despite having right of residence in the country. Without a personal number everyday life can become a hassle. There may thus be grounds for reviewing the regulatory framework and how it is applied, in order to protect freedom of movement.” “A person that has been granted residency for at least a year in Sweden can be registered as a resident. This means that if you’re employed and you work, or are going to work, in the country you are also able to register as a resident in the country. It is important that there are clear criteria for who can enjoy Swedish welfare. A requirement for non-citizens should be that they are able to support themselves and that they pay taxes in Sweden. Authorities could get better at informing about the rules that are in place though, and guide concerned EU citizens about the course of action to take in order to register as a resident.” “If you are a citizen of an EU/EEA country, you are entitled to work in Sweden without a work permit. If you work and have sufficient means to support yourself, you automatically have right of residence in Sweden and therefore need not register with or apply for a residence permit at the Swedish Migration Agency. You are entitled to start working immediately upon arrival in Sweden. You are also entitled to come to Sweden to search for work. In accordance with the EU principle of equal treatment, citizens of EU/EEA countries are treated in the same way as Swedish employees. When you work in Sweden, your employer is required to pay social security contributions for the work you perform here. This means that you are covered by the Swedish social insurance system, which entitles you to benefits, e.g. in case of sickness.” “In general, we want to reduce bureaucracy and simplify rules. Those who have the right to a personnummer need to be able to get it as soon as possible. We want Sweden to be a country that is open to the rest of the world, open for trade and attractive to come and work in.” “The Left Party has on repeated occasions brought this up with the government and asked how coordination numbers (samordningsnummer) – a number given to people who are in Sweden temporarily – can be used to fill this vacuum. Unfortunately, we haven’t found a good solution for it yet. But we will investigate this issue further.” “It has to get faster and easier to get a so-called 'coordination number' to make it possible to do traineeships and work.”