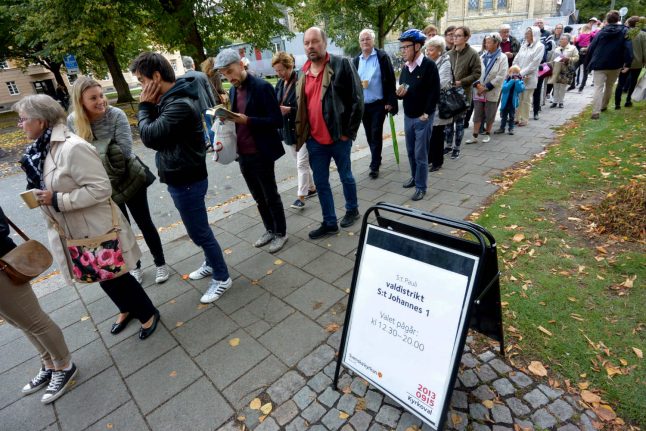 According to preliminary figures released by Sweden’s Electoral Authority (Valmyndigheten) on Monday, participation in Sunday’s election was 84.4 percent, one point higher than at the same stage following the election in 2014.

Once all votes had been counted in 2014, total voter turnout reached 85.8 percent.

Municipalities that saw the largest increases in voter turnout were Nykvarn and Vaxholm, with 6.7 and six-point preliminary increases on 2014 respectively. The municipality of Knivsta, up 5.7 points, also saw a large increase in participation.

Some municipalities also saw a fall in turnout out. These included Bräcke (9.2 percent), Övertorneå (6.7 percent) and Aneby (5.7 percent), where fewer people cast votes than last time around.

The lowest general election turnout seen in Sweden this century was in 2002, when 80.1 percent of the population voted. Participation increased at each of the subsequent three elections in 2006, 2010 and 2014.

The highest-ever general election turnout was 91.8 percent in 1976.

READ ALSO: What next for Sweden after election nailbiter?