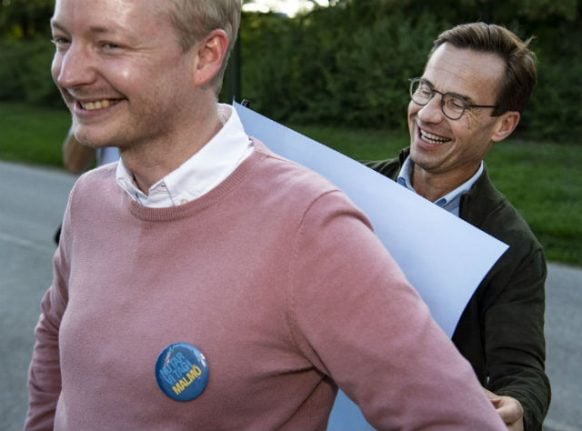 Torbjörn Tegnhammar, leader of the Moderate Party on Malmö's council (front) campaigning with last week with Moderate Party leader Ulf Kristersson. Photo: Johan Nilsson/TT
Magnus Olsson, who leads the Sweden Democrats on Malmö City Council, said he had met his Moderate counterpart Torbjörn Tegnhammar to discuss how to oust Social Democrat mayor Katrin Stjernfeldt Jammeh.
“What we talked about was quite simply how we will be able to do it, if there is a possibility for the Sweden Democrats and the Alliance to push through this change of control, and how it might look at the end,” Olsson told the Sydsvenskan newspaper.
The talks show that the centre-right Conservative Party is willing to meet and hold discussions with its far-right counterpart at least at a city level, perhaps opening the way for a similar move nationally.
Tegnhammar stressed that he had not entered into formal negotiations with the anti-immigration party.
“It was discussion,” he told Sweden’s state broadcaster SVT. “I would like to insist that we are not cooperating or negotiating.”
Shortly after meeting Olsson, Tegnhammar met with Roko Kursar, the local leader of the Liberal Party,and Niels Paarup-Petersen, the leader of the Centre Party.
“We are keeping all discussions around how Malmö should be run to ourselves,” Paarup-Petersen said after the meeting. “Just now it’s about keeping your head cool until everything is in place.”
The three Alliance parties hold between them 20 of the 61 seats on Malmö's city council and 31 seats together with the Sweden Democrats.
This means means that they can theoretically oust the Social Democrats, Greens and Left Party, who hold 30 seats between them.
This could change once the final 3,000 votes finish being counted on Wednesday. If they shift just one seat over to the red-green bloc, then it will be able to maintain its grip on power.
It would also change if the leaders of the Centre or Liberal Parties felt that ousting the Social Democrats would leave them too dependent on the anti-immigration party.
Olsson has previously said that his party might be willing to help the Alliance replace the Social Democrats without demanding anything which would push the Centre Party or Liberal Party councillors out of the Alliance.
“I want to be clear with the Alliance: Don’t be frightened of us Sweden Democrats,” he said.
“We have no ambition to turn Malmö upside down and cause chaos. We are genuinely ready to take responsibility and do what we can to make sure a power shift happens and can work in practice.”
Olsson said that as his party and all three Alliance parties were committed to ousting the Social Democrats, the chance of success was “pretty good”.