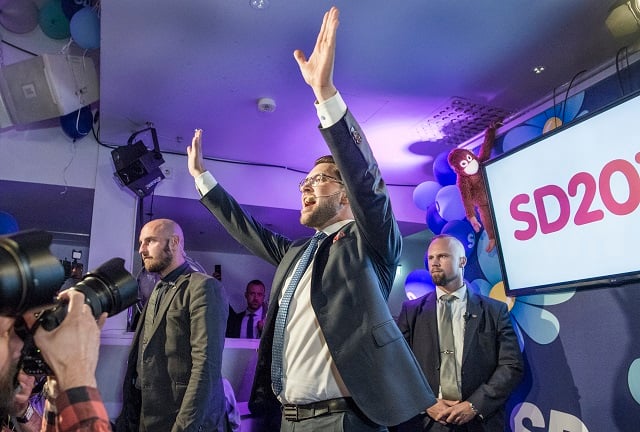 The anti-immigration party came in third, behind Prime Minister Stefan Löfven's Social Democrats and the opposition conservative Moderates, with 17.6 percent of votes, up 4.7 points from the 2014 elections.

But that rise is smaller than the 7.2-point increase the party saw between 2010 and 2014, and far below the expectations of party leader Jimmie Åkesson, who, several hours before polling stations closed, said he was confident of winning “20 to 30 percent”. It was also well below several opinion polls prior to the election, with  the most favourable ones suggesting support around 26 percent.

So was the election result a setback for the party?

“Not at all,” said Mattias Karlsson, head of the party's parliamentary  group and its main ideologue. “All parties want to be as big as possible but we are the big winners of the election,” he told AFP.

After having largely underestimated the Sweden Democrats in previous elections, polling institutes overcompensated this time and overestimated them, he said.

READ ALSO: What next for Sweden after election nailbiter? Yet the fact remains that they did not see the breakthrough they hoped for, and the seven other parties in parliament continue to ostracize the far-right and exclude it from discussions to form a new government.

“Their core voters are white men from the working class, but they've broadened their electoral base, with more women, more immigrants and more people in big cities,” says Anna-Lena Lodenius, an investigative journalist specializing in far-right movements.

“They may still be able to climb by three or four points” and match the levels enjoyed by the far-right in other European countries such as Switzerland or Austria, she says.

“We think we can still grow in some areas, like women, union members, voters of foreign background,” said Karlsson, who on Monday wrote in a Facebook post that there were only two options ahead: “victory or death.”

While immigration and integration of immigrants played a big part in the election campaign, the far-right “ran up against a strong ideological counter-offensive” from the Greens and the ex-communist Left, as well as the Centre Party, a member of the centre-right Alliance, notes Linköping University professor Anders Neergaard.

And the right-wing parties, the Moderates and Christian Democrats, also attracted some far-right supporters by adopting some of the Sweden Democrats' ideology — at times using rhetoric verging on Islamophobic.

READ ALSO: Will Swedish values survive the next two weeks?

Generally, the far-right's geographical and sociological base is not spreading dramatically.

“They're growing everywhere, but they're strong where they already were strong and weak where they are generally weak,” such as the three big cities of Stockholm, Gothenburg and Malmö, notes Lund University political science professor Anders Sannerstedt.

Two factors will likely influence the far-right going forward, experts suggest. Firstly, the party's position in parliament's balance of power the next  four years; and secondly, whether Sweden will succeed in integrating the hundreds of thousands of asylum seekers it has taken in.

“If they don't get the influence they want, there is a clear risk that they will radicalise … Then they'll either grow or their voters will tire of them,” Lodenius predicts.

Should the left- and right-wing reach a cross-bloc cooperation to shut out the Sweden Democrats — an idea currently being tossed around — “they will be seen as the only opposition party,” Sannerstedt adds.

And if efforts to integrate immigrants were to yield better results, “immigration will be perceived as less problematic.” But, he says, “there's nothing to indicate that that will be the case.”

The unemployment rate among foreign-born people is four times that of those born in Sweden. Meanwhile, the Sweden Democrats' success in municipal elections held the same day has left them short-handed. In their strongholds in the south, they won more mandates in local elections than they have candidates to fill seats.

“People are subjected to a lot of threats, there's a strong social exclusion, in workplaces and unions. You lose friends or jobs, and that makes it hard for us to recruit people,” says Karlsson. Despite its electoral success, “the Sweden Democrats remain a pretty hated party,” Sannerstedt notes.