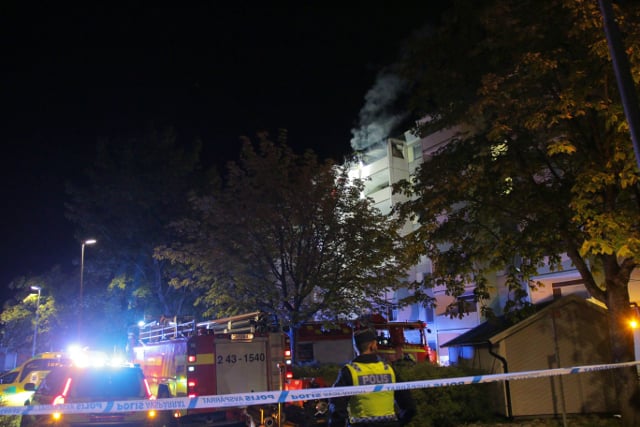 The fire is believed to have started in a student apartment. Photo: Mattias Landström/TT

Emergency services were called out to the blaze in student accommodation in the Råslätt area of Jönköping shortly after 2am.

Two people jumped from the building to escape the flames. One of them was caught by a life net and escaped without serious injuries, but the other person jumped before fire services arrived and was seriously injured. Swedish media reported they had jumped from balconies on the seventh floor, which is the top floor.

The county hospital in Ryhov confirmed that one person was “critically injured”, although by Thursday afternoon their condition was described as “serious but stable”. Another two people suffered medium injuries and were being treated in hospital.

The other eight were understood to have minor injuries, mainly due to smoke inhalation.

Around 200 residents were initially told to evacuate the building, although the fire mainly affected the apartments of around 50 people. The CEO of housing firm Vätterhem said “intensive work” was underway on the property in order to make some of the affected homes habitable by next week.

Most of the people who live in the building are students, and the fire is believed to have started in a student apartment. Police have opened an investigation into “carelessness endangering the public”.

A police press spokesperson told The Local she did not have further information about the identity of those injured in the fire.

The blaze was extinguished by 3am and by midday, cordons around the area had been removed and the technical investigation at the scene had been concluded.

“Now the work remaining is to compile the investigation and, if possible, determine the cause of the fire,” police said in a statement.