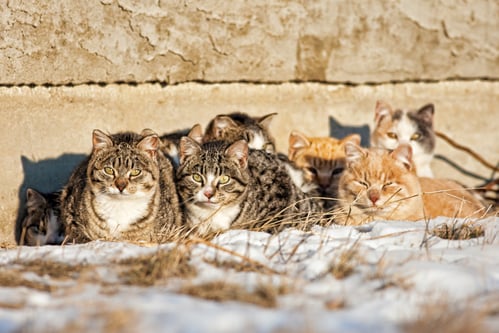 Stock photo: Depositphotos
According to a report by local newspaper Haparandabladet, the 90-year-old man took in a wild cat around five years ago. The cat soon had kittens and the animals lived a semi-feral existence, coming to the man’s property for food and shelter.
Local officials hired a company to catch the cats with the intention of having them put down by veterinarians. That company has invoiced the man a total of 241,000 kronor, which he didn't understand that he was supposed to pay.
The case is now being examined by the Swedish Enforcement Authority (Kronofogden), an authority mostly known for collecting debts but which also regulates contract disputes.
Friends of the 90-year-old man say that he suffers from dementia and does not understand what is happening. He simply continued to set out food for the cats.
The company that was called out to capture the cats, Binagårdens hund- och kattpensionat, said that it has had to visit the man’s property numerous times in order to catch them.
“We had to go to the man’s home several times and there are also costs for the veterinarians for killing the cats,” company spokesman Andreas Laine told broadcaster SVT.
According to the elderly man’s acquaintances, he did not understand that he was supposed to pay the various invoices he received from the company.
The Swedish Enforcement Authority paid two of the invoices by garnishing the man's resources, while the third invoice will be paid from the man's pension fund.
He now reportedly has no money remaining in his savings account. One of the man’s friends told Haparandabladet that it was shameful that the man did not have anyone to help him understand the situation.
A municipal spokeswoman said that for reasons of confidentiality she could not comment on the case.