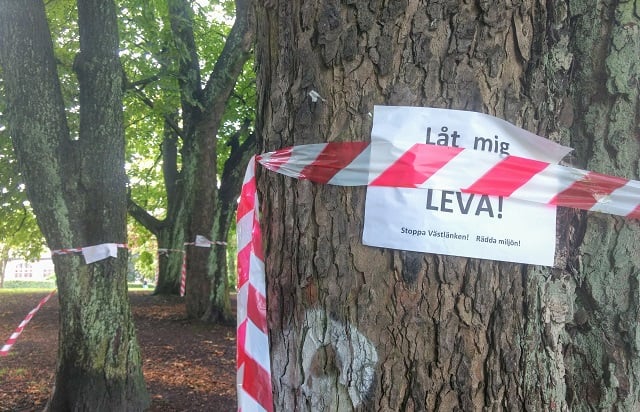 Posters protesting the construction of the railway. Photo: Viktoriia Zhuhan

The Västlänken, or West Link, railway project had politicians and voters divided in Gothenburg ahead of the election, and the newly created local party, Göteborg Demokraterna (Gothenburg Democrats) soared with a promise of stopping the construction.

Despite some polls predicting a win for the party, it ultimately came second, with the Social Democrats outdoing them by around three percentage points. The future of the Västlänken project however remains unknown.

What is the Västlänken, and why is it so important to Gothenburgers?

The Västlänken project is based on an old idea of building an underground railway tunnel in Gothenburg. It was included in preliminary city plans as early as mid-90s but the construction started only in May 2018. The estimated cost is 20 billion kronor.

The project's proponents believe that Västlänken will ensure faster and easier commutes in Gothenburg, sparing each traveller up to 15 minutes per route and freeing up space in the central station for long distance trains.

The activists campaigning against the tunnel argue that it won't bring the promised infrastructural benefits but instead will harm the environment and disrupt existing communication for a ten-year period.

These critics have been organizing protest actions for a few years, with thousands of participants. One of the biggest such marches in Gothenburg took place in September 2017 with between 10,000 people (according to the police) and 17,000 (according to organizers).

Over time, public opinion of the project has shifted from a positive general view to a more negative one, Daniel Jansson from the SOM Institute in Gothenburg explained to The Local. As the question became a big part of the political debate, it has become more and more polarized, he continued.

According to the 2016 poll conducted by SOM in the city, very few people had no opinion on the construction and almost a third of the population was strongly against it. The institute's research shows that the tunnel project has been losing public's support in the Västra Götaland county every year since 2011 when it was first measured. 2017 was the first year when the respondents with a negative attitude toward it outnumbered the positive.

A protest march in September 2017.

The new local party was founded by a former Moderate, Martin Wannholt. In 2014 he stood for elections with a strong criticism for Västlänken which was against his party line. The Moderate Party then didn't nominate him for re-election as a municipal councillor, meaning Wannholt had to cooperate with another party, Vägvalet.

He then founded Demokraterna in May 2017 and since the first annual meeting, the party has received up to five new members a day until the elections. Stopping Västlänken was the number one issue in their manifesto, and they ultimately finished second in the election, with 17.2 percent of the vote.

What are the other parties' views on the project?

When asked by Expressen GT whether the project would be stopped, the Demokraterna leader said “immediately”, the leader of Vägvalet answered “it costs a lot of money, makes almost no use, ruins the environment and city life in Gothenburg for ten years”. Of the major parties, the Sweden Democrats were the only one to share this view, with the leader saying that either Västlänken or a congestion tax should be introduced.

On the other side, the Social Democrats, Moderates, Christian Democrats, Liberals, Centre Party, and Green Party all said it would not be stopped. The exceptions were the Left Party and Feminist Initiative, whose leaders said the municipality did not get a say in the construction since it was decided at a state level.

The other main parties emphasized the high cost of cancelling the project, the positive environmental effect of Västlänken, and said the new railway would give a boost to the labour market and public transport options.

How did voters respond?

The Demokraterna received over 17 percent of the vote, a huge result for a newly created and single issue party.

However, there were several factors in their success.

Västlänken was not key in the Gothenburg elections, research director at SOM Institute Henrik Ekengren Oscarsson explained, as many issues were competing for voters' attention. Only three parties stood for disruption of the tunnel project, and overall, the majority of voters did not opt for these three.

Just like at the national level, no bloc has the majority, and the Demokraterna's success left the Social Democrats severely weakened in an area which has long been one of their strongholds.

Why did Social Democrats have the worst election in years?

The only party the Demokraterna had lost to in Gothenburg was the Social Democrats who had historically held leading positions in the region. These elections have been the worst for the party in 24 years.

Professor of political science Gothenburg university Anders Sundell told Expressen that the Social Democrats in Gothenburg had faced the same issues as socialist parties all across Europe, with their electoral base and political environment changing.

According to political science professor Ekengren Oscarsson, the dissatisfaction with the ruling authorities in Gothenburg was fueled by corruption. “There has been a history of corruption and bribery in the city and one of the messages from the Demokraterna was to try to come to grips with that culture,” he told The Local.

The Västlänken issue amplified the dissatisfaction as the voters felt like the politicians listened neither to the experts, nor to the people, added Ekengren Oscarsson. In 2014 the city voted against congestion tax in a referendum – the tax was about financing Västlänken. But despite the referendum, local politicians pressed on.

So what does this mean for the future of Västlänken?

When asked about the future of this promise by local newspaper Göteborgs Posten, one of the party founders Jan Jörnmark wasn't able to provide any details. But he stated that if Demokraterna don't deliver within two years, the party will fall apart.

“Demokraterna need to explain to the people of Gothenburg that they do not have 51 percent of the votes so now they will need to cooperate with other actors,” Ekengren Oscarsson stated. If the young party keeps the voters informed and bring proposals to the negotiations table with other parties, it will still look like a victory for Demokraterna, he said.

For now, what this means is trying to find a compromise.