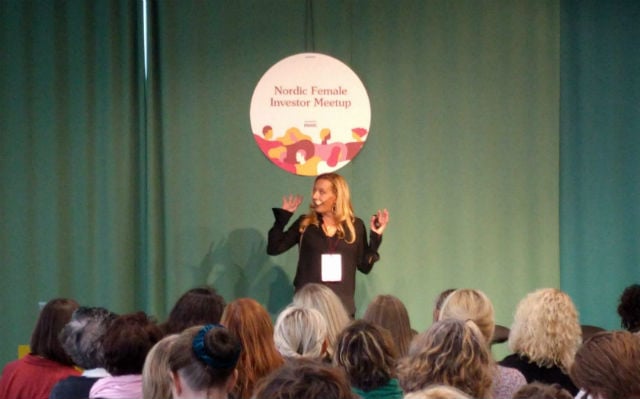 Elisabeth Brevenson thinks there needs to be more publicity for successful female entrepreneurs. Photo: Richard Orange
When the Malmö startup founder Elisabeth Brevenson first started winning plaudits as a “female entrepreneur”, it surprised her that there were so few other women doing what she was doing.
“I was wondering if I have a genetic defect in some way because I seem to be very rare,” Brevenson joked at the Nordic Female Investor Meetup in the city on Monday. “I think that females in general we haven't been taught in business life to take risks and we haven't been told to think big.”
More than 200 guests came to the event, which aims to increase the number of women in Sweden's startup world by encouraging successful women to become angel investors, teaching women how to pitch in the tech world, and sharing insights among them.
Brevenson, who sold her SMS messaging company Beepsend to the US messaging provider Twilio last year in Skåne's first female-led tech exit, told The Local that she had not been conscious of herself as a “female” entrepreneur when she started out.
“I never thought of myself as a 'gender' in that sense. I'm an only child and had a lot of support from my father,” she said. “I see that with a lot of strong women.” Elisabeth Brevenson. Photo: Richard Orange/The Local
Jeanette Andersson, the business adviser at Malmö startup house Minc, launched the afternoon conference with an alarming statistic: 82 percent of venture capital investment in Sweden goes to all-male teams, 15 percent to mixed teams, and only four percent to all-woman teams.
But Minc is working hard to change that. Charlotta Alegria Ursing, Minc's chief executive, said that around 40 percent of the startups currently based at Minc are mixed or female-led companies, while three of the six companies who made it through its recent accelerator programme were female-led.
In next year's iteration of the Fast Track Capital accelerator programme, Minc aims for 50 percent of its investments to be in companies with female co-founders.
“We know that diversity in itself is an important part of success,” Ursing said. “We know that diverse teams will perform better than just men. You need the mix.”
Gunilla Sydsjö, a professor at Linköping University, argued that research suggested that women are less likely to willingly take risks, although they are just as able as men to perform well in stressful situations.
“It is evident that we have a lower tolerance for risk in some situations,” she said.
While she acknowledged that social conditioning played a part, she stressed that biology did too.
She said different levels of the hormones testosterone and oestrogen in men and women affect behaviour, as does the generally higher levels of monoamine oxidase, an enzyme associated with lower risk-taking, in women. Jeanette Andersson. Photo: Richard Orange/The Local
But Andersson said that higher levels of risk-taking were not necessarily advantageous, with the evidence suggesting that companies with women among the founders generated higher revenues than those without.
Andersson said that women were also much less likely to focus on technology as an end in itself while losing sight of the needs it is supposed to meet.
“If a guy says, 'this is a cool technology, how can we use it?', the women we will think 'here is a problem?' how do we solve it?'” she said. Dr Vedrana Högqvist Tabor. Photo: Richard Orange/The Local
One such business is BoostThyroid, founded and led by Dr Vedrana Högqvist Tabor, a former senior research scientist at Sweden's Karolinska Institutet.
Two months after leaving Minc's accelerator programme in June, BoostThyroid raised €320,000 in pre-seed funding from Malmö investors Sophia Bendz and Hampus Jakobsson, and from the venture capital fund Wave Ventures.
Tabor told The Local that she believed the direction the startup world is moving in makes it easier for female entrepreneurs.
“It is a time when we are getting more space: it's not only about introvert, deep-tech things like it was before, it's also things that are more mission-driven.”
She launched the company out of frustration at how hard it had been for her both to get a diagnosis for her own thyroid condition and then to get useful information afterwards.
She said she believed that while being a woman might make her “more empathetic” than her husband and co-founder Mikael Högqvist Tabor, it was less relevant to her success than her scientific expertise.
Events like the Investor Meetup should help to get more women involved in Malmö's startup world, she said.
“I'm a bulldozer, I don't care. I can go and talk to a room full of men. But maybe others are a bit more timid, and this really helps.”
Brevenson said she believed one important route to getting more women involved in the tech industry was to make them more aware of the existing success stories.
“I've been working on statistics and the internet, and what gets you to the top is case studies, other examples,” she said. “So to get other women, it's important to get the media to write about it.”