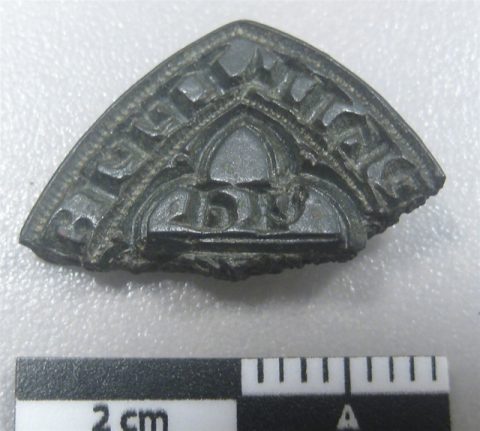 The fragment of the stamp can be dated back to 1341. Photo: Acta Konserveringscentrum/TT

The group found a fragment of a medieval seal on Biskops Arnö, in between Uppsala and Stockholm.

“I was very lucky to make that discovery,” archaeologist Maria Lingström, one of the group of archaeologists which is linked to the Swedish History Museum, told The Local. “The shaft for the pipeline was just one metre wide and about ten metres deep by the time I examined it. Without a metal detector, I wouldn't have found it.”

She said the find was particularly unusual because of its connection to the church; the fragment is believed to have belonged to archbishop Petrus Philippi, who died in August 1341, according to archivists.

“Only about fifty seal stamps that belonged to the clergy have been found so far in Sweden,” said Lingström. “This particular stamp was personal and the archbishop carried it with him at all times.”

Seals were used instead of signatures during the Middle Ages in order to authenticate documents, as well as for sealing documents or packaged.

When Philippi died in 1341, the stamp was most likely destroyed right after his death. “That was done to prevent people from impersonating the bishop by using his seal,” Lingström explained.

However, she doesn't expect to come across any more discoveries on the site, as the seal was found during a small excavation in connection with pipeline construction, which has now been concluded.