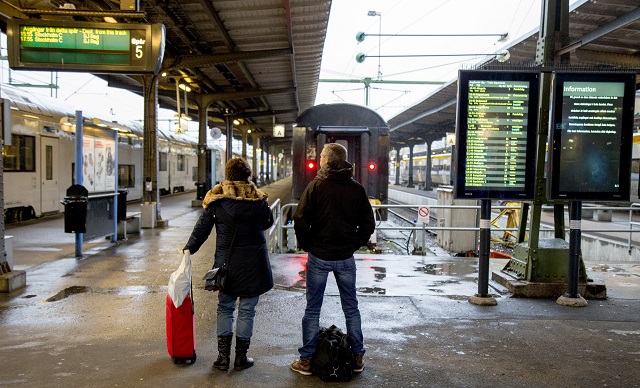 Gothenburgers wait at the train station during an earlier storm. Photo: Adam Ihse/TT

Storm Knud is expected to hit the West Coast on Friday, with the Swedish Meteorological and Hydrological Institute (SMHI) forecasting wind speeds of between 90 and 100 km/h on Friday evening.

A class-two warning has been issued for several western regions: Skagerrak, Bohuslän, Göteborg, Dalsland and western Västergötland, with Halland on a class-one warning after being downgraded from the higher level.

But the stormy weather won't be limited to those areas, with heavy winds also expected in most of the rest of Götaland and Svealand.

The forecast remains uncertain, with SMHI noting that it may change over the course of the day, both in terms of the direction and the strength of the winds. Rail and boat traffic has already been affected and further disruption may be announced later in the day.

Sweden's Transport Administration has cancelled trains on four stretches of track in western Sweden, with the ban in place for almost 24 hours from 4pm on Friday. The affected lines are Uddevalla–Strömstad, Varberg–Borås, Borås–Herrljunga and Håkantorp–Gårdsjö

Even traffic by boat has been affected. Stena Line has cancelled several ferry departures between Sweden and Denmark on Friday, with the lines between Gothenburg and Frederikshavn as well as the Varberg–Grenå line facing disruption.