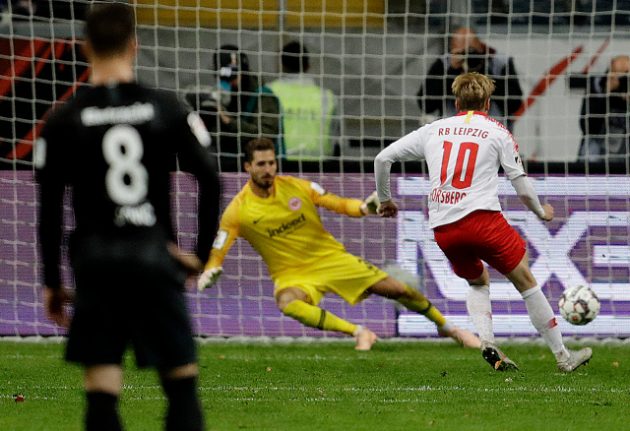 Hosts Frankfurt went ahead against Leipzig when Swiss midfielder Gelson Fernandes took advantage of disruption in the Leipzig defence to score the opening goal on 26 minutes with RB centre-back Wili Orban off the pitch.

The burly Leipzig defender was being treated for injury on the sidelines when Fernandes fired home a rebound after a save from Leipzig goalkeeper Peter Gulacsi.

Germany striker Timo Werner then wasted a chance to equalize late in the first half, but the Leipzig forward mistimed his header and sent the ball over.

After a determined start to the second half, Leipzig were rewarded when Forsberg equalized from the penalty spot on 54 minutes after his cross had been handled by Filip Kostic.

The opportunities then came thick and fast for Leipzig as Forsberg fired wide from close range and Werner was unable to convert a late chance.

Before the match, furious Leipzig coach Ralf Rangnick dropped French junior internationals Jean-Kevin Augustin and Nordi Mukiele in a row over their use of mobile phones.

The pair were caught using their phones – breaking team protocol – in the build-up to Thursday's 3-2 Europa League home defeat against Red Bull Salzburg.

“The boys will be back in the squad for training tomorrow and I hope they paid attention to this warning,” said Rangnick after the draw in Frankfurt.

“The topic is now closed for us and we are looking forward to Wednesday's league game against VfB Stuttgart.”