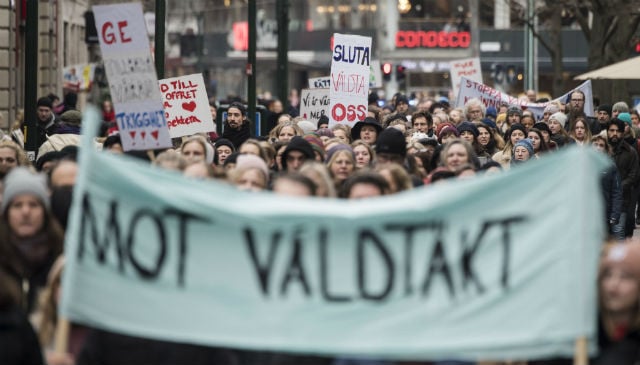 Hundreds marched in protest after the four rapes were reported in quick succession in December. Photo: Johan Nilsson/TT
One investigation was dropped after the plaintiff admitted to have fabricated the story, and two others were discontinued due to lack of evidence or failure to identify a perpetrator.
The four attacks received extensive coverage in December from right-wing news organizations such as the UK's Daily Mail and Breitbart News in the US. A police warning to women in the city not to go out at night alone was widely reported internationally, although police later retracted this advice and said it had been “unfortunate and unclear”. Concerned residents also held a march to protest against sexual violence.
Nine months later, though, only one of the four reports has led to a successful prosecution, according to a follow-up article by the Dagens Nyheter newspaper.
In February, one of the four alleged rape victims admitted to the police that she had lied, after medical tests and other forensic evidence contradicted her story.
“The woman said she had not been raped at the time in question,” prosecutor Lena Körner said. “The probe has also shown that rape did not take place.”
READ ALSO: Woman admits lying about Malmö rape
On May 17th the investigation into the alleged rape of a 17-year-old girl by a gang in a playground in the Sofielund area of Malmö was also abandoned, partly because the woman's injuries did not tally with her description of the events.
“There are uncertainties over what exactly happened,” Körner told Sydsvenskan. “We have an account from the victim of what happened. We have tried to find evidence to back it up, but we haven't managed to get all the way there.”
“We don't know what happened, because the plaintiff could not supply all the information.”
This case had generated headlines around the world, with Andy Roberts, the police chief for Malmö North describing it as “terrible, particularly brutal crime”.
Kurdish-Swedish economist Tino Sanandaji and Czech-Swedish journalist Katerina ­Janouch, among others, spread reports on social media that the girl had been “tortured” by her attackers, with her lower abdomen burnt with a lighter.
When story hit the international press, the Swedish “underliv” was mistranslated several times as “vagina”.
The Malmö police was already on December 20th moved to put out a press release emphasizing that it was not true that the woman had been burned.
“The report from the medical examination states that that there were no burn wounds to the woman's abdomen. In addition, she was only lightly physically injured,” the release read.
Körner would not discuss with Sydsvenskan whether there was any evidence that the attack had taken place, but she said that the woman did not risk being charged.
This year, Malmö has witnessed another series of alleged rapes, with local police on Monday calling 30 people in for compulsory DNA tests in the hope of identifying the perpetrator of two of them.
The first incident took place in Amiralsgatan in Rosengård on May 22nd, and the second on June 2nd in the upmarket harbour district of Västra Hamnen.
Two men have been arrested previously in the case, only to be released when DNA tests did not show a match.