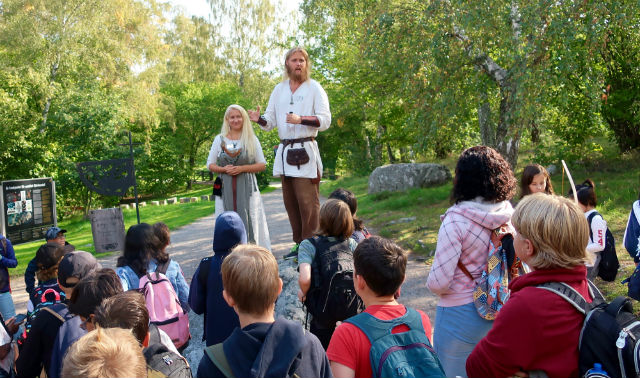 Photo: Students from Futuraskolan International School of Stockholm on a trip to Birka.

Although thousands of schools around the world follow the IMYC, only one school in the northern hemisphere is accredited to run the curriculum. It’s a badge of honour, worn proudly by staff and students at Futuraskolan International School of Stockholm.

Head of Humanities and Curriculum Co-ordinator at Futuraskolan International School of Stockholm, Simon Phillips, has taught both the British National Curriculum and the IMYC. It’s no contest, he says, when it comes to choosing which he prefers.

Find out more about Futuraskolan International School of Stockholm

Photo: Simon with a class at Futuraskolan International School of Stockholm

“I prefer teaching the IMYC, of course,” he tells The Local. “The main difference is the IMYC is not so regimented. Every class is different, as you get to know the students you get a feel for what they enjoy learning and the IMYC gives me more scope as a teacher to tailor the lessons.”

The IMYC follows six-week units built around a conceptual theme, called the ‘Big Idea’. Each unit is based around a theme such as ‘adaptability’, ‘consequences’, or ‘respect’, and encourages students to think beyond the topic by elevating the theme and making connections across different subjects. Students from Futuraskolan International School of Stockholm on a trip to Birka.

“It’s based on research about how the adolescent brain works. So, for example, they’re more prone to take risks, they work well in groups and often have an issue with organisation. So it’s a curriculum designed to plug into those features,” explains Simon.

Each unit commences with an Entry Point when teachers set the stage for learning and get the unit underway. This year, the Entry Point for students at Futuraskolan International of Stockholm was a day trip to the Birka archeological site, once an important Viking settlement and regarded as Sweden’s first city.

“With the Birka Entry Point we will have some activities that the children will do during the trip that will encourage them to think about this unit’s theme. It’s basically an entry point to the unit, kind of like a springboard to start it off and get them thinking about the theme and how it might be addressed in different subjects.”

The day kicked off early with a two-hour boat trip out to Birka which is 30 km west of Stockholm on the island of Björkö in Lake Mälaren. Two guides dressed in Viking gear drew the students’ attention to significant historical sites along the way before taking them on walking tour of the island.

Eighth grader Wiktoria Pieczara explains that she and her classmates came prepared, having spent the previous week working on science and humanities projects relating to the island. Find out more about Futuraskolan International’s network of 13 schools

Wiktoria really enjoys the IMYC, particularly on days when she gets to see her learning come to life.

“It was really good because we’d done the research but then saw it in real life. You learn a lot more visually, seeing the different things actually exist and learning about them in more depth,” she says.

Wiktoria enthusiastically recalls one of  the previous year’s Entry Points, when the school took students for an overnight stay on Gotland, Sweden’s largest island in the Baltic Sea.

“We visited caves and biked around the whole island. We were there for two days and learned about the history of Gotland. It was really exciting.”

Futuraskolan International School of Stockholm eighth grader Felix Brehmer has been at the school for two years. At his previous school he had followed the Swedish curriculum, although he admits he much prefers the IMYC which he describes as “organised” and “connected”. “You can connect things afterwards like the nature we saw and the Viking history which we are doing in humanities. It’s really interesting to see something in real life and not just look at a computer or a piece of paper.”

Both students agree the IMYC is a curriculum that suits their preferred style of learning as well as making every day at school more of an adventure.

“The IMYC is a really interesting programme,” says Wiktoria. “Sometimes you know what you’ll be doing but sometimes the teachers surprise you! Sometimes they say ‘Let’s play a game!’ or they have us focus on a different topic instead.”

Compared to traditional curriculums, the IMYC is admittedly much more creative but it’s also rigorous and intensive. It’s a hard balance to strike but one which Futuraskolan International School of Stockholm has achieved, a success cemented by its accreditation. Students from Futuraskolan International School of Stockholm on a trip to Birka.

“It’s a stamp of approval,” concludes Simon. “Lots of schools follow the curriculum but they haven’t had that quality assurance.”

This article was produced by The Local Creative Studio and sponsored by Futuraskolan International School of Stockholm.