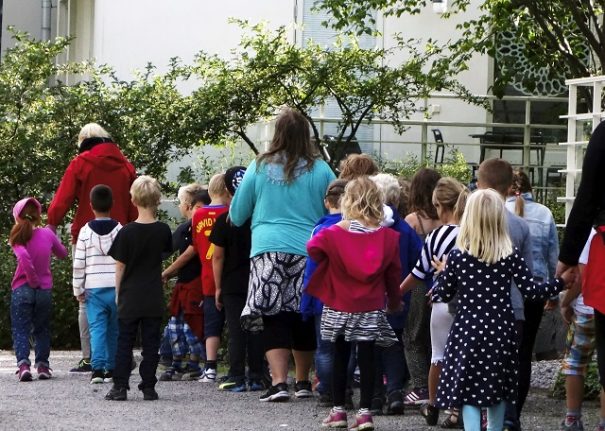 “It isn't at all as serious as it first appeared,” police officer Bengt Jeppsson, who led the investigation into the incident, told The Local on Thursday afternoon. “There was no crime; we haven't been able to find any crime.”

When asked by The Local if police believed the driver's actions were deliberate, he said: “No, no, we don't think so any more.” In earlier comments to Sweden's Expressen newspaper, Jeppsson had said he did not believe the act was deliberate but that it could not yet be ruled out.

Two students were touched by the car, one on the wrist by the vehicle's wing mirror. The school's headteacher, Martina Sjöström, was taking part in the outing but did not witness the incident. She told The Local that “the experience of staff and students was that the car was driven carelessly in relation to the traffic conditions”, but added that the students did not need any sort of treatment for injuries or upset after the incident and that “all the students feel fine”.

The apparent careless driving was described as a “horrifying incident” in the UK tabloid Daily Express, which misrepresented the accident by saying the car “plough[ed]” into a “crowd” of children.

Several of the responses to the Daily Express' post on Facebook made references to Islam and immigration, while others called it “fake news”.

The incident was misreported on several international far-right websites, including InfoWars (which falsely stated that a “national manhunt” was under way), while another site said it was “unusual that only one Swedish news source initially reported on the incident”. It was also reported on an American neo-Nazi website, which used the incident to call for “state-sponsored purging” of Muslims.

One far-right Twitter account, Peter Sweden, labelled the incident a “terrorist attack”, writing: “I bet you haven't heard about this – Because it's barely been covered in the media!”

The Local spoke to Åsa Melkersson, schools operation manager in Sölvesborg municipality told The Local that there was “absolutely no need” for any of the students to see a doctor or visit hospital after the incident and that the students who were closest to the car “feel fine”.

“The school counsellor was at school yesterday but nobody needed to speak [about the incident] and there was no one who was injured,” Melkersson added. “There was one student who was just touched by the wing mirror. The teachers spoke with that student directly, and that student was more interested in talking about the activities and their pedometres.”

“The students were having an outdoor day, a walk of about 15 kilometres. During the walk towards the end of the day, the children were going down a narrow path in small groups, when a car came by and was driving perhaps a bit faster than you should, and zig-zagged through the groups of children and ended up touching two children. The assessment was that it wasn't a serious incident but the teachers reported it to local police.”

Melkersson said she was even mulling the idea of using the incident to teach schoolchildren about source criticism and false reporting. When The Local asked headteacher Sjöström about this possibility, she said that the school and municipality had had discussions through the week about the incident and the way it was reported in the media, and that “when everything has calmed down” they would discuss possible further actions.

The headteacher explained: “The school obviously reacted since the media's reporting in certain cases was a long way from the truth. We have, where we had the possibility, communicated the correct information to the media and also to the school's students and their guardians. Today [Friday] Sölvesborg municipality will publish the correct information on its website.”

The statement from the municipality emphasized that none of the staff or students present had felt that the driver had any intention to harm anyone or deliberately attack them, but were “perplexed” at the misreporting and speculation over the incident.

Editorial note: This article was updated on September 28th to include comments from headteacher Martina Sjöström and comments from the Sölvesborg municipality website