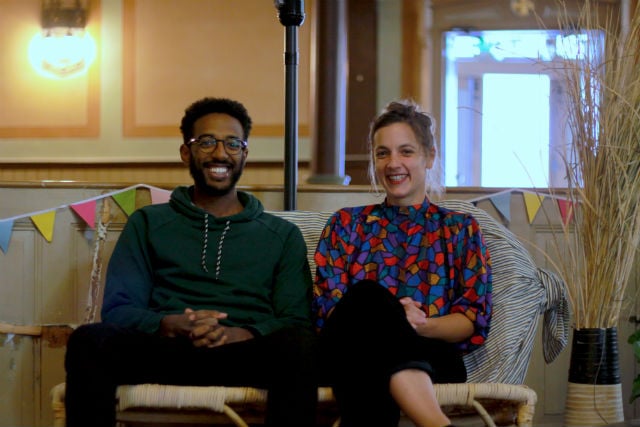 hejhej-mats: Yoga with a cause Sophie Zepnik and Anna Souvignier have always shared a common passion for green living. Originally from Germany, they got the idea for hejhej-mats — a yoga mat company using recycled materials and closed-loop production — during their studies in Malmö.

“We were both looking into master’s programmes and knew that Sweden was ahead of the game when it came to sustainable development and innovation. That’s when we found the Leadership for Sustainability master’s programme at Malmö University, and were super happy to both get accepted,” says Anna.

“Neither of us had the intention of starting our own business but the idea came after visiting an art exhibition that criticised yoga practitioners for not thinking about the environmental impact of the yoga mats they practice on.”

And so, the idea behind hejhej-mats was born: yoga mats made from foam cut-offs rather than natural materials that lead to deforestation. The closed loop production model means that the mat can also be recycled at the end of its lifespan.

Find out more about studying at Malmö University

“We try to have a social impact as well; the logo is sewn on by individuals with disabilities who have a harder time getting access to the labour market, and part of our profits are donated to an NGO for children’s education,” says Sophie.

Although the company is thriving (they’ve received ample press in magazines such as Vogue and are currently completely sold out of mats) the journey hasn’t been easy; one and a half years passed between the initial idea and having the product in hand. Getting financial support from Drivhuset, Malmö University’s centre for student innovation, was key to their success.

“We’re sure that without the University’s help we would never have been able to take this idea as far as we’ve done,” Anna says.

“From the very beginning, no-one questioned our ability to found our own sustainable start-up, and having that support from the get-go made us think ‘Okay, we can do this’.” This month, Malmö locals have been able to visit a space that was formerly closed to the public — the desacralised and privately owned Caroli Church. The church welcomes anyone who wants to hang out in what has now been transformed into an indoor park. Passersby can come and grab a book to read, relax in a deck chair by the plant-adorned altar, or bring their kids to run around in the play area among the pews.

When Ezana Mussie and Fernanda Jaraba decided to create a serene space in the city, Caroli Church was just what they were looking for.

“We developed a project plan during a course we both did as part of our Urban Studies master’s programme at Malmö University. The idea is based on what we call ‘urban sanctuaries’, which are places for relaxation that are free of advertisements, entrance fees or the pressure to consume,” explains Fernanda.

“Caroli Church was perfect because it’s in the middle of the city, unused, and has this particular, tranquil atmosphere,” Ezana adds.

Caroli Park has been immensely popular since opening, with up to hundreds of visitors daily and a team of enthusiastic volunteers helping out with everything from collecting donations to building furniture.

Ezana and Fernanda are observing how people interact with the space so that they can recreate the project elsewhere.

“We hope to find more opportunities to make urban sanctuaries like this one. Stress levels are increasing, the city is becoming denser and we need more spaces that are not focused on reducing people to consumers or different types of productive citizens,” says Ezana.

Fernanda agrees that stress is a big problem.

“There’s a tendency to feel like you’re constantly wearing a mask or performing in a certain way. It would be nice if people could be themselves and disconnect from those pressures not only in their own homes, but also in public.”

Coastlines: The ABCs of climate change Climate change is a pressing issue for all of us, but it’s not always easy to make sense of the science behind facts and figures. Wanting to present the geographical impact of climate change in a way that was accessible and interesting, Johan Elmehag decided to create a typeface based on what coastlines will look like in future.

“It can be unsettling to receive facts, so I wanted to make something that was easy to grasp and not intimidating. I created a future map based on what the world would look like if all the ice caps melted, and started to see letter forms in exposed areas. I found an A in the north of Italy, for example, and realised that these letters could be used to organise geographical information.”

The Coastlines typeface, which has been downloaded by people across the globe, also includes links to articles about flood control, natural disasters and sea levels.

Johan, who is currently doing an internship at a design studio in Oslo, developed the custom font while studying at Malmö University.

“I think Malmö University provides a great space to explore yourself and meet people who share the same interests as you. You actually learn the most from your classmates, especially in creative subjects, because there is so much group work and discussion,” he says.

Johan is aware the letter shapes are “eccentric” and hopes this will encourage people to look into why the letters look weird and what they mean. Next year, he is planning to launch his own type foundry.

“I think artists can be anarchists when it comes to putting forward ideas, but we also have to be sensitive about the kind of work we produce because we have a power to build concepts in other people’s minds. That’s something I’ve understood after studying visual communication — what a great impact art actually has on our conception of the world. I think we have a big responsibility.”

This article was produced by Malmö University.