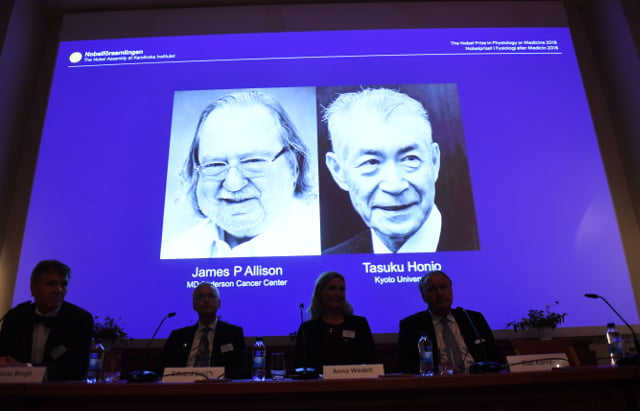 13:00 'This is really a groundbreaking discovery'

The Local's Catherine Edwards has been speaking to Jonas Bergh, an oncology professor at the Karolinska Institute and a member of the Nobel Assembly, about what made this year's awarded research stand out.

“This was very unique. A lot of immune therapy has been ongoing for decades; it was very successful in mouse models but rarely worked in humans because we didn't really understand the sophistication of the brakes, so this is really a groundbreaking discovery that there were these brakes which prevented the immune system from reacting against cancer cells,” he says.

“Very rapidly there have been enormous clinical implications for cancers including those which are more difficult to treat such as lung cancer and renal cancer – you bring the effect of therapy up to a markedly different and better level. It is perhaps most pronounced for melanoma where traditional therapies have limited effect.” And does he have any predictions for what the future consequences will be?

“There are numerous things. Firstly, not all patients who receive the therapy are responding so the question is how to identify those who will respond. Secondly, how best to make use of that therapy? Thirdly, can you use these therapies together with conventional therapies like chemotherapy and radiotherapy? There are promising observations in certain types of breast cancer with a lot of DNA mutations and marked genetic variability. By combining therapy there are many more patients for whom all tumours disappear.”

“On a broader scale, how can we ensure access of these drugs to many patients, because these are very costly interventions. There's a lot to do so you should come back in ten years and I'm sure we would have a lot of revolutionary news on this. These two scientists made fundamental discoveries which really changed our knowledge of the immune system.”

Well, that's all from us today. Thanks for following our live blog, congratulations to James P Allison and Tasuku Honjo, and join us tomorrow morning for the announcement of the Nobel Prize in Physics.

Here's what it looked like when the 2018 laureates were announced:

The #NobelPrize in physiology or medicine 2018 is awarded to James P. Allison and Tasuku Honjo. Here's the video of the announcement: pic.twitter.com/tx6qqU69Ag

We're now waiting to speak with one of the experts on the Nobel Committee to find out more about Allison, Honjo and their research.

Here's a picture of Thomas Perlmann, the secretary-general of the Nobel Committee, speaking with Honjo just minutes before announcing his name to the world.

Someone is receiving exciting news from Thomas Perlmann, the Secretary-General of the Nobel Committee.

Find out who! Watch the announcement live stream at 11:30am (CEST).

Perlmann told journalists here in Stockholm that Honjo was very pleased. He does look quite happy:

Just in! Nobel Laureate Tasuku Honjo, surrounded by his team at Kyoto University, immediately after hearing the news that he had been awarded the 2018 #NobelPrize in Physiology or Medicine. pic.twitter.com/8TdlnXiSLe

James P Allison was born in 1948 in Texas, where he also received his PhD in 1973. He has worked at several prestigious institutions, including the University of Texas, the University of California (Berkeley) and the Memorial Sloan-Kettering Cancer Center in New York.

He has been a professor at the University of Texas MD Anderson Cancer Center in Houston, Texas, since 2012 and is affiliated with the Parker Institute For Cancer Immunotherapy.

It is still very early morning in the US, so understandably the Nobel Committee has not yet managed to get in touch with Allison to let him know that he'll be going to Stockholm in December, but Swedish news agency TT has spoken to him. I could be wrong, but I think they were the ones to inform him of the happy news, and apparently his first words were “thank you, thank you, wow”.

I'll have more for you about Tasuku Honjo shortly.

How did the Laureates react to the news? “Dr Honjo sounded extremely pleased and rather surprised” says Thomas Perlman. They've not got hold of Dr Allison in the US yet

The Nobel Foundation tweets that “laureate James P Allison (from Texas, USA) studied a protein that functions as a brake on the immune system. He realized the potential of releasing the brake and unleashing our immune cells to attack tumours. He developed this concept into a new approach for treating patients.”

And Tasuko Honjo (from Kyoto, Japan) “discovered a protein on immune cells and revealed that it also operates as a brake, but with a different mechanism of action. Therapies based on his discovery proved to be strikingly effective in the fight against cancer.”

We're now hearing about their discovery, described as ”an entirely new principle for cancer therapy” pic.twitter.com/CEDllZvCOh

This year's #NobelPrize constitutes a landmark in our fight against cancer. The discovery made by the two Medicine Laureates takes advantage of the immune system's ability to attack cancer cells by releasing the brakes on immune cells. pic.twitter.com/2mppP3NT19

James P Allison and Tasuku Honjo “for their discovery of cancer therapy by inhibition of negative immune regulation”. Congratulations!

And the winners of 2018's Nobel Prize in Medicine or Physiology are James P Allison and Tasuku Honjo pic.twitter.com/Ms3aFE7MLF

11:20 Frenchman at centre of Nobel scandal jailed for raping woman

There will not be a Nobel Literature Prize this year, after a row sparked by rape charges against Jean-Claude Arnault, a well-known figure on Stockholm's cultural scene, tore the Swedish Academy (the prestigious institution that usually hands out the prize) apart and prompted the resignation of several of its Members.

Today's Nobel Prize in Medicine or Physiology, however, has nothing to do with this.

The medicine prize was the third prize mentioned in the will of Alfred Nobel, the Swedish scientist and inventor who first made a vast fortune from his invention of dynamite in 1866, then decided to turn his attention to more altruistic areas of life and ordered the creation of the famous Nobel prizes.

Nobel decreed that the bulk of his estate should be invested in “safe securities” and, as a result, about 31.5 million Swedish kronor, equivalent today to about 1.7 billion ($190 million), were used to create the Nobel Foundation. Since 1901, the year the first Nobel prizes were awarded, the foundation has funded the awards.

It almost didn't happen. Nobel died childless in San Remo, Italy, in 1896, but two nephews tried to have the will nullified, and even King Oscar II of Sweden opposed his wishes, saying they were not “patriotic minded”.

Inside, the media representatives have already picked the best spots. #nobelprize2018 #medicine #physiology
Follow @TheLocalSweden for a live blog on today‘s event! pic.twitter.com/F3yW0hyoG1

Good morning and welcome to the start of the Nobel Prize season, with this year's winner of the Medicine or Physiology, chosen by the Nobel Assembly at the Karolinska Institute, to be revealed later this morning.

The Local's Europe editor Catherine Edwards and our intern reporter Nele Schröder are at the Karolinska Institute just north of Stockholm to bring you all the latest from the press conference. I – Emma Löfgren, editor of The Local Sweden – am manning this live blog. Tweet us if you have any questions, or, if you are a Member of The Local, log in to comment below (don't miss our student offer with a 50 percent discount).